India Celebrates Independence Day 2022: PM Modi said the completion of 75 years of Independence was a time to step towards a new direction with a new resolve. 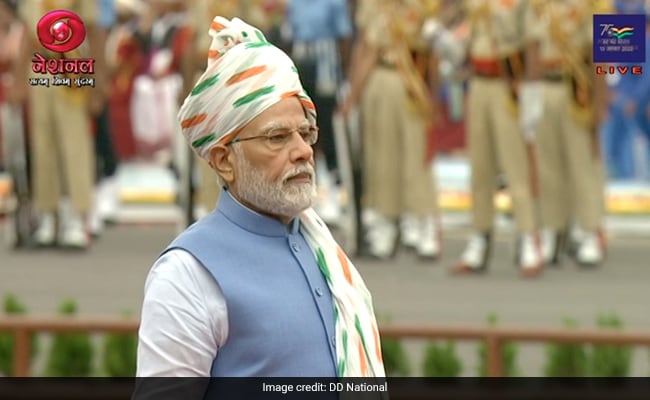 Prime Minister Narendra Modi today led the Independence Day celebrations from the ramparts of the Red Fort in New Delhi.

"Our tricolour is waving in its full glory not only in India, but in every corner of the world," the Prime Minister said in his address to the nation.

He said the completion of 75 years of Independence was a time to step towards a new direction with a new resolve.

"During our freedom struggle, there was not one year where our freedom fighters did not face brutality and cruelty. Today is the day when, as we pay them our respects, we need to remember their vision and dream for India," PM Modi said.

Here are the highlights on Independence Day 2022:

Get NDTV UpdatesTurn on notifications to receive alerts as this story develops.
Aug 15, 2022 18:02 (IST)

#WATCH | Punjab: Beating Retreat ceremony underway at the Attari-Wagah border near Amritsar on the occasion of #IndependenceDay#IndiaAt75https://t.co/go8dBir66g

J&K | A 750-square feet national flag that has travelled from Sikkim to Antarctica was displayed at Lal Chowk in Srinagar#IndiaAt75pic.twitter.com/J8mRNh43Mw

Many Thought India Will Be Ruined If British Left, But It Flourished: PM https://t.co/3hjvasVqgJpic.twitter.com/BEu7NNO1Gu

Hearty felicitations to PM Shri @narendramodi ji and people of India on the auspicious occasion of the Independence Day of India.

My best wishes for the continued progress and prosperity of India. Spirit of cooperation and friendship will further deepen in the days to come.

Delhi | Chief Justice of India NV Ramana hoisted the tricolour in the Supreme Court on #IndependenceDay#IndiaAt75pic.twitter.com/ZSkADC5sHq

"House For Every Indian, Double Farmers' Income": PM's Promises For 2022
While interacting with beneficiaries of the Pradhan Mantri Awas Yojana Gramin (PMAY-G) in June 2018, the PM had said the government was working to ensure a home for every Indian by 2022.
Aug 15, 2022 14:05 (IST)

India's diversity on full display at the Red Fort. #IndiaAt75pic.twitter.com/6FFMdrL6bY

On Independence Day, Made-In-India ATAG Gun Used In Ceremonial Salute
For the first time, a made-in-India howitzer gun was part of the 21-gun salute during the Independence Day celebrations at Red Fort in New Delhi on Monday. The Advanced Towed Artillery Gun (ATAG) was used along with British-made 25-Pounders.
Aug 15, 2022 12:17 (IST)
French President Emmanuel Macron congratulates India on Independence Day

"House For Every Indian, Double Farmers' Income": PM's Promises For 2022
While interacting with beneficiaries of the Pradhan Mantri Awas Yojana Gramin (PMAY-G) in June 2018, the PM had said the government was working to ensure a home for every Indian by 2022.
Aug 15, 2022 10:46 (IST)
Bill Gates congratulates PM Modi, calls India's development in healthcare, digital transformation "inspiring"

As India celebrates its 75th Independence Day, I congratulate @narendramodi for prioritizing healthcare and digital transformation while spearheading India's development. India's progress in these sectors is inspiring and we are fortunate to partner in this journey #AmritMahotsav

#IndependenceDay | Uttarakhand Chief Minister Pushkar Singh Dhami hoisted the national flag at his residence in Dehradun and administered the oath of national unity to the people and security personnel present there. | reported by news agency ANI pic.twitter.com/FiUjPeCM9B

PM Modi In Independence Day Speech: "Let's Pledge To Wipe Out Misogyny"
He said for India to achieve the goals envisioned by its freedom fighters in the next 25 years, women have to play a critical role. If we uplift women and empower them, we can achieve the goals in a shorter duration and with less effort, he added.
Aug 15, 2022 08:57 (IST)
Corruption, nepotism two main challenges: PM Modi
"Until and unless, people have the mentality of penalizing the corrupt, the nation cannot progress at the optimum pace. Another evil we need to come together against is nepotism. We need to give opportunities to this who are talented & will work towards the progress of the nation"
Aug 15, 2022 08:48 (IST)
If we look at India's Nari Shakti in law, education, science, police; In every aspect of life , our daughters and mothers are making major contributions to India: PM Modi
Aug 15, 2022 08:44 (IST)

PM Lists 5 Pledges To Fulfill Freedom Fighters' Dreams Of India
Prime Minister Narendra Modi, addressing the nation from the historic Red Fort as India celebrates 75 years of Independence, listed five pledges the citizens must take to fulfil freedom fighters' dreams for India by 2047.
Aug 15, 2022 08:16 (IST)
PM Lists Five Pledges In Independence Day Speech
"In coming years, we've to focus on 'Panchpran'- First, to move forward with bigger resolves & resolve of developed India; Second, erase all traces of servitude; Third, be proud of our legacy; Fourth, strength of unity and Fifth, duties of citizens which includes the Prime Minister and Chief Ministers
Aug 15, 2022 08:08 (IST)
'Har Ghar Tiranga' campaign is an example of the entire nation coming together to celebrate the spirit of our glorious country, says PM Modi
Aug 15, 2022 08:03 (IST)

Sporting A Tricolour Turban, PM Modi Addresses The Nation From Red Fort
The celebrations for 75 years of Independence are being marked by a mega programme, the Azadi ka Amrit Mahotsav, which started in March 2021.
Aug 15, 2022 08:00 (IST)

#IndependenceDay | "India's society is aspirational. That is something to be proud about": PM @narendramodipic.twitter.com/pZjemW5xPY

Aug 15, 2022 07:56 (IST)
India is the mother of democracy: PM Modi
"India is the mother of democracy. India has seen a lot of ups and downs in the last 75 years. There have been sorrows as well as achievements in these years. We faced natural calamities, wars and other problems. But unity in diversity became our guiding power"
Aug 15, 2022 07:50 (IST)
Nation remembering those who made sacrifices but were forgotten and not given their due: PM Modi on 75th anniversary of Independence Day
Aug 15, 2022 07:47 (IST)
PM pays tributes to India's women fighters, including Rani Lakshmi Bai and Begum Hazrat Mahal, says the nation is beholden to them
Aug 15, 2022 07:43 (IST)
Our tricolour is waving in its full glory not only in India, but in every corner of the world today, PM Modi in his address to the nation
Aug 15, 2022 07:41 (IST)
During our freedom struggle, there was not one year where our freedom fighters did not face brutality & cruelty. Today is the day when, as we pay them our respects, we need to remember their vision & dream for India, says PM Modi
Aug 15, 2022 07:38 (IST)
I congratulate all Indians and those who love India on this Independence Day. It is a day to step towards a new direction with a new resolve, says PM Modi
Aug 15, 2022 07:35 (IST)
PM Modi begins his address to the nation from the ramparts of the Red Fort in Delhi
Aug 15, 2022 07:31 (IST)
PM Narendra Modi hoists the National Flag at Red Fort 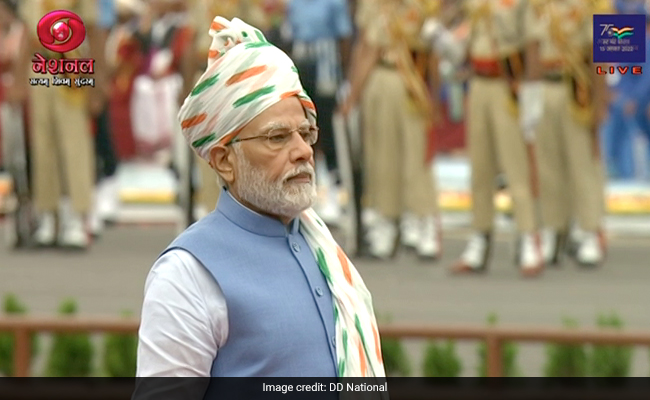 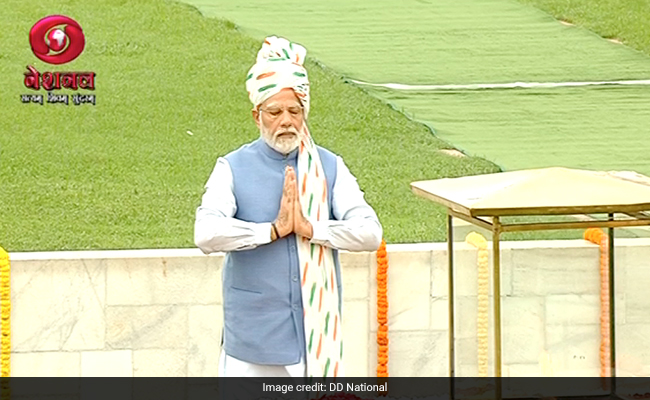 'Har Ghar Tiranga' Campaign Drives 'Unprecedented' Demand For National Flag
'Har Ghar Tiranga' campaign by the Centre to commemorate 75 years of the country's Independence has helped boost demand for the tricolour as flag makers and traders are witnessing a surge in order and sales of the national flag.
Aug 15, 2022 06:49 (IST)
Union Minister Kiren Rijiju hoists national flag at his residence

Aug 15, 2022 05:37 (IST)
Monuments, Heritage Buildings Lit Up To Celebrate India's 76th Independence Day
This year on August 15, India will once again come together to salute the sacrifice of the brave freedom fighters on the occasion of Independence Day.