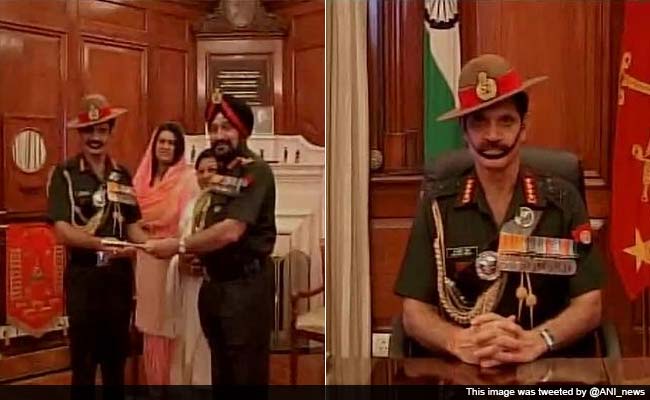 New Delhi: Outgoing Army Chief General Bikram Singh said today that the Indian Army gave a "befitting reply" after a soldier was beheaded by Pakistani troops in 2013 along the Line of Control (LoC).

Asked by reporters whether India gave a befitting response to the killing, General Bikram Singh said, "It has been done. Please understand that when we use force, that use is from tactical to operational to strategic levels. When I mention that during that incident, it was aimed at operations at the tactical level, which have been undertaken. I think this has been done by the local commander, the chiefs have nothing to do with it."

An Indian soldier was beheaded and another killed by Pakistani troops who crossed over into Indian territory in the Mendhar sector of Jammu & Kashmir on January 8 last year. That incident and a series of ceasefire violations took the strained ties between the neighbours to a new low.

General Singh had said after the incident that the Army would retaliate "at a time and place of its choosing."

Speaking to reporters before handing charge to new Army Chief General Dalbir Singh Suhag, General Singh ruled out the possibility of war with China, even as India raises a Mountain Strike Corps at the cost of Rs 64000 crore to counter Chinese troops.

"I do not foresee a war with China. There is good understanding between the two countries at the macro level. I do not see a contingency with China," General Singh said.

The general played down the alleged intrusions in recent months by the Chinese army along the Line of Actual Control (LAC). "Both side lay claim over the area and like the Chinese we too patrol the area, however, there are robust rules of engagement," he said.

General Singh was less optimistic about continued peace with Pakistan. The Line of Control has been very active, he said, adding that repeated ceasefire violations were linked to infiltration attempts from across the border.

Promoted
Listen to the latest songs, only on JioSaavn.com
Referring to the modernization of the army and its arsenal, General Singh said no single commander can complete the procurement process. "The next chief will take them forward," he said, adding, "the show will go on".