Foreign Secretary Vijay Gokhale said that India recognises the importance of the interface between trade and the digital economy. "We also affirm the role of data for development." 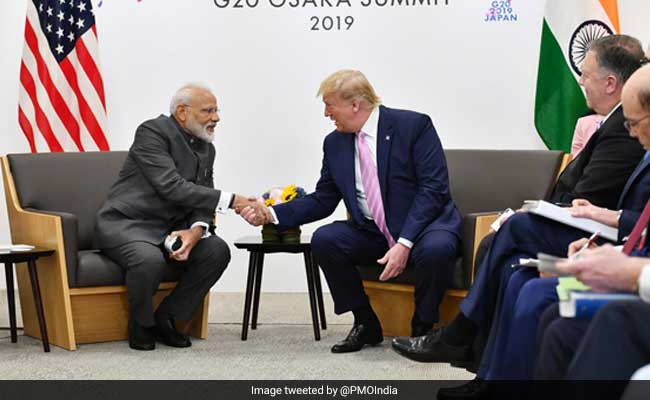 PM Narendra Modi met Donald Trump in Japan's Osaka on the sidelines of the G20 Summit.

Data is a "new form of wealth" and it needs to take into account the requirements of developing countries, India said today even as US President Donald Trump opposed data localisation and policies restricting the digital trade.

US firms like Google, Mastercard, Visa and Amazon have lobbied against data localisation rules around the world including India.

Addressing a press conference after Prime Minister Narendra Modi met Donald Trump in Japan's Osaka on the sidelines of the G20 Summit, Foreign Secretary Vijay Gokhale said that India recognises the importance of the interface between trade and the digital economy. "We also affirm the role of data for development."

"From our perspective, data is a major issue, it is an issue which we are also domestically looking at where international rule-making is taking place," he said.

India's view and the view of other BRICS countries is that data should be discussed within the World Trade Organization (WTO) context and not outside the WTO context, Mr Gokhale said. "Data is also needs to take into account the requirements of developing countries."

"It is a new form of wealth," the Foreign Secretary added.

Donald Trump, at the inauguration of the G20 Summit, said that the US opposes data localisation. "We must ensure resilience and security of our 5G networks, it's essential to our shared safety and prosperity. US opposes data localisation and policies which have been used to restrict digital trade flows and violate privacy and intellectual property protection," he said.

"The US seeks a future of digital trade that empowers all of our people. We look forward to working with other G20 members to advance an open, fair and market-based digital economy that provides for the free flow of data and brings new prosperity to all of our nations," the US President added.

In April last year, the Reserve Bank of India issued a directive on 'Storage of Payment System Data' and advised all system providers to ensure that within a period of six months, the entire data relating to payment systems operated by them is stored in a system only in India, for effective monitoring.

Many US companies have raised concern over the issue of data localisation and its impact on their operational cost.