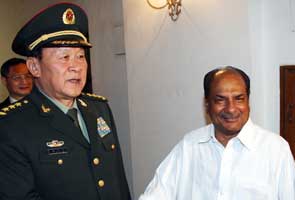 New Delhi: Joint military exercises between India and China will be resumed after a four-year gap, Defence Minister A.K. Antony announced Tuesday after talks in New Delhi with his Beijing counterpart.

The two nations have had an often fractious relationship over their shared border, and they halted joint military exercises in 2008 due to a series of diplomatic spats including over visa issues.

"We covered a lot about the situation in the South Asia, Asia-Pacific region and we have covered a lot of issues," Antony said. "We had a very frank and heart-to-heart discussion on all the issues... including in the border areas."

The disputed border between India and China has been the subject of 14 rounds of fruitless talks since 1962, when the two nations fought a brief, bloody war over Arunachal Pradesh.

China's buildup of military infrastructure along the frontier has become a major source of concern for India, which increasingly sees Beijing as a longer-term threat to its security than traditional rival Pakistan.

"We have reached a consensus on high-level visits and exchange of personnel, maritime security... and cooperation between the two navies," Guanglie said after Tuesday's talks.

"I had candid and practical discussion with the defence minister," he added.

Guanglie's four-day visit comes amid fears about increased Chinese activity in countries such as Sri Lanka and Bangladesh which is seen as within its sphere of influence.

The presence of exiled Tibetan spiritual leader the Dalai Lama in Dharamshala is another cause of prickly relations between the two nations.

Promoted
Listen to the latest songs, only on JioSaavn.com
Heavy security on Tuesday prevented demonstrations by Tibetan exiles living in New Delhi.