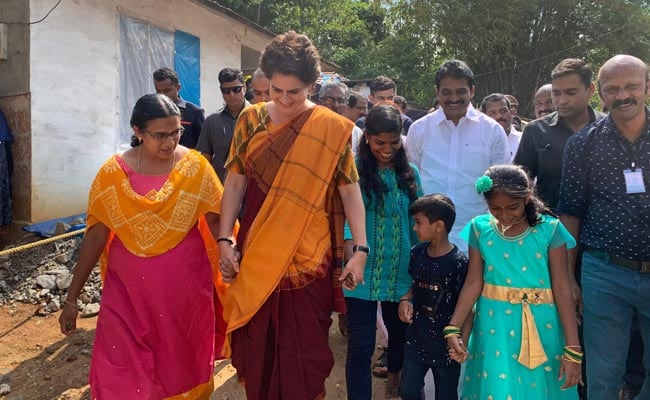 The Congress leader interacted with the family members of Kumar for quite some time who lost his life in Pulwama terror attack on February 24, in which 40 CRPF jawans lost their lives after a suicide bomber of Pak-based terror outfit JeM rammed an explosive-laden vehicle into their convoy in south Kashmir.

Before meeting the martyr's family, Ms Gandhi also expressed her condolences for the victims of serial bomb blasts in Sri Lanka, which took place earlier in the day. "People were celebrating a day of happiness, but now they are in immense grief. My condolences to all of them and support to all their families," she said.

Speaking at an election rally on Saturday in support of her brother Rahul Gandhi, who is contesting from Wayanad Lok Sabha seat, apart from Amethi in UP, Ms Gandhi said that she had seen him from close quarters and accused the BJP of maligning his image.

In Kerala, 20 Lok Sabha seats are at stake. The state will go to polls on April 23 in the third phase of seven-phased elections. The counting of votes will begin on May 23.