In Video Of Brutal Murder On Road, Man Struck 27 Times With Swords

Rafiquddin, a local criminal, was having tea at a roadside stall on Tuesday morning when the attackers, armed with swords and sticks, set upon him. 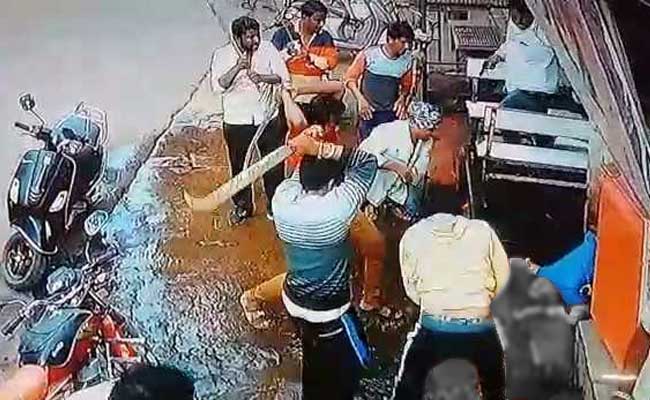 The attack took place in Maharashtra's Dhule, around 280 km from Mumbai.

Mumbai: In extremely disturbing CCTV footage of a murder on Tuesday, a man is hacked to death with swords by a group of 11 men in broad daylight in Maharashtra's Dhule, around 280 km from Mumbai. The men kept striking Rafiquddin, a local criminal, long after he had stopped moving. He was also shot in the head.

The video from a camera installed in the neighbourhood was leaked after it was taken by the police, and was widely circulated online.

Rafiquddin, 33, was having tea at a roadside stall in the heart of the city on Tuesday morning when the attackers barged in with swords and hockey sticks and set upon him. The police say he was struck 27 times with swords before the killers escaped in bikes and scooters.

When he collapsed, the attackers dragged him out of the shop and rainwater collected on the road rapidly turned crimson with his blood. In the video, one attacker keeps raining blows on his head, not stopping until he is pulled away by a gang-mate.

The police have not made any arrests so far. With the help of the eyewitnesses, including the tea stall owner and staff, they have filed a First Information Report and have identified some of the attackers, who allegedly belong to a rival gang of local goons.

Promoted
Listen to the latest songs, only on JioSaavn.com
Rafiquddin, say officers, was out on bail and had in his record more than 30 cases of extortion, rape and murder.

The horrific killing in full public view has left the town in shock.