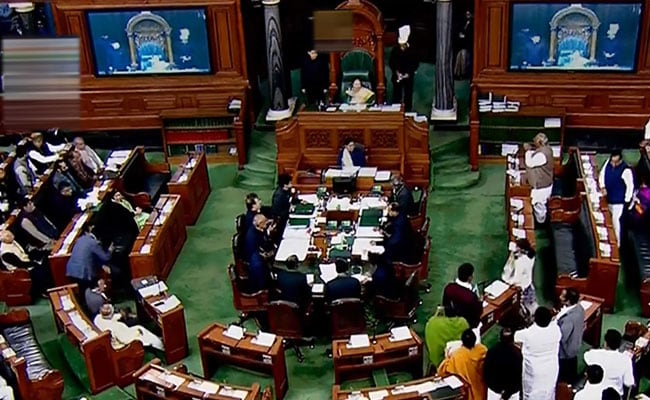 Congress leaders did not raise any question on yoga in parliament's winter session.

Amid many confrontations in parliament on the Citizenship (Amendment) Bill and other issues that dominated debates during the winter session, yoga found a mention in the House quite a number of times.

According to the officials, 14 parliamentarians raised 11 questions related to yoga during this three-and-a-half week session, with nine of them from the BJP.

Considering that Prime Minister Narendra Modi's interest in yoga is well-known, the BJP has of late been emphasising on the need for all MPs to raise the issue in parliament.

A PDP and a DMK MP asked AYUSH Minister Shripad Naik to give information on yoga, probably indicating the growing nation-wide interest in the pursuit. Parimal Nathwani, industrialist and Rajya Sabha MP from Jharkhand raised two different questions on the subject during the session.

However, the lawmakers from the Congress party did not raise any question on the topic.

The concern of most of the MPs was about the need for qualified yoga trainers in the country, especially in their states or constituencies, for ensuring that this practice with a multitude of health benefits is accessible to the public. The MPs also sought details of various government schemes for promoting yoga.

From the phrasing of their questions, many of the MPs seem to be in favour of introducing yoga in school curriculum, and also recognising this practice as an effective solution to lifestyle diseases prevalent in the country.

Opening of yoga universities, research into the ancient Indian practice, and provisions for yoga facilities in tourist destinations were some of the other questions that were raised in the parliament.

The replies of the AYUSH minister brought out some interesting facts about the government's plans for taking yoga to the public.

One of those was that yoga is set to figure prominently in the "Fit India Movement".

Moreover, the AYUSH ministry has developed yoga protocols for children and adolescents, and a database of training services is being finalised.

Yoga certification activities are being strengthened through coordination between the Yoga Certification Board of the ministry and the stake-holding yoga institutes. This will substantially increase the availability of trainer-volunteers of yoga to take the Fit India Movement forward.

The Yogalocator App is being revamped to make information regarding training facilities available to the public.

The minister also clarified that financial assistance provided by the Centre to states under the National AYUSH Mission can also be used for setting yoga wellness facilities. It was also clarified that the Ministry of AYUSH has plans to strengthen Yoga Research, for which two post-graduate research centres are being set up at Jhajjar in Haryana and Nagmangala in Karnataka.

Mr Naik said while the AYUSH ministry does not propose to set up any yoga university, it has plans to systematise certification of professionals and accreditation of institutions through which the quality of yoga training activities in the country would be enhanced significantly.