In Sikkim, Over 350 Stranded In Heavy Rain And Landslides Rescued

Mountain streams in Sikkim are in spate and still bringing down boulders, said officials in the state government 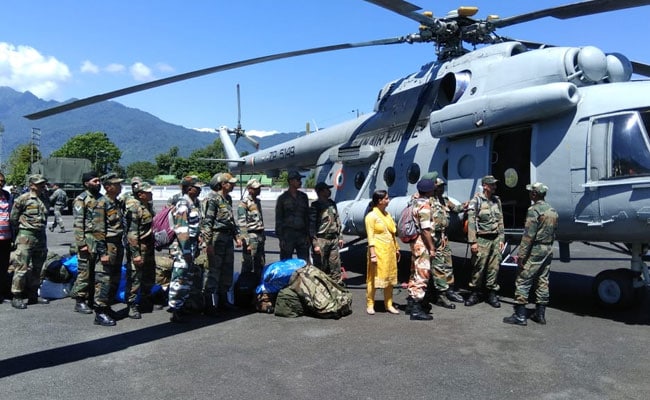 Over 350 stranded in Sikkim after heavy rain and landslides rescued

Nearly 350 people have been rescued by the Indian Army in Sikkim over the last two days, after torrential rain and massive landslides hit the hill state. Five helicopters of the Army evacuated stranded tourists, locals and security personnel posted at the border.

The helicopters of the Army's 112 Mountain Brigade, posted in north Sikkim, started the sorties at about 6.30 am on Sunday, to airlift the stranded people and through the day over 100 tourists, including a pregnant woman, 216 Army personnel and 12 personnel of Indo Tibetan Border Police (ITBP) were rescued. 22 tonnes of relief material were also air-dropped in the remote villages.

The relief and restoration work in Sikkim is being carried out on a war footing since the rain stopped late on Sunday. The state power department has restored electricity connections in most parts of Sikkim and water supply has also been restored, say government officials.

The forest department officials and the quick response team have cleared all the blocked roads in Mangan town and other areas, along the North Sikkim highway.

Officials of the state government have said many mountain streams are in spate and still bringing down boulders, causing landslides.