In PM Modi's Trip To Kyoto, a Takeaway for His Varanasi Dream 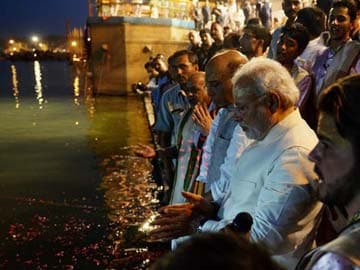 File Photo: Narendra Modi performs the "Ganga Puja" in Varanasi on May 17

New Delhi: Prime Minister Narendra Modi's visit to Japan this weekend also holds significance to his vision for Varanasi, the Uttar Pradesh town that voted him to Parliament in the national election.

PM Modi is expected to travel first to the historic city of Kyoto to meet Japanese premier Shinzo Abe.

Kyoto is a world class city of the kind the Prime Minister wants to replicate in Varanasi, sources say, and he wants to learn more about "smart cities".

Since he came to power with massive popular support for his promise to develop India, Mr Modi has repeatedly talked about 100 "smart cities" that combine cutting edge technology with heritage.

Varanasi is among some 15 holy cities that have been chosen for a major facelift.

Sources say the Urban Development Ministry will make a presentation today before the PM, who had asked for a "realistic" development plan for these cities.

Besides Varanasi, towns like Amritsar, Ajmer, Gaya, Mathura and Kanchipuram are also on the list. These are popular religious destinations that attract a large number of tourists but have fallen behind in infrastructure and are not among the cleanest of Indian cities.

The Prime Minister's Office wants the restoration plan to include the "social, physical and economic infrastructure" of heritage cities, say sources, and also to take into account income groups and social profiles.

Promoted
Listen to the latest songs, only on JioSaavn.com
The PM's Office has reportedly given specific inputs for Varanasi, which is seen by many as crowded and dirty. Mr Modi had promised to make Varanasi the "spiritual capital of India". A team of officials reportedly visited Varanasi this week.

The Prime Minister's constituency is also part of the Rs 100 crore project to develop the riverfront and the integrated Ganga conversation mission.