Congress alleged Amit Shah had taken a loan of Rs 25 crore while mortgaging a piece of land owned by him but it was not mentioned in the 'liabilities' section in Rajya Sabha affidavit. 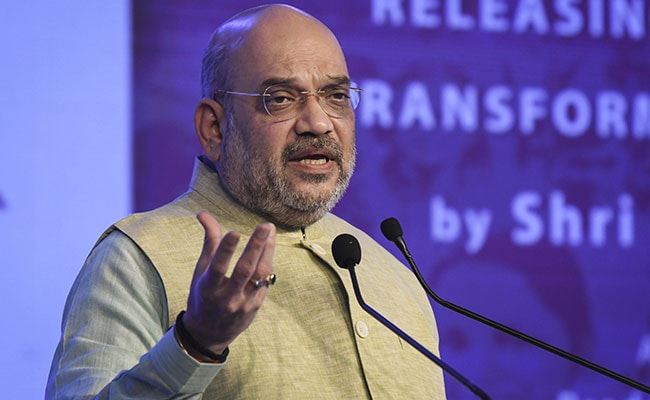 Congress has demaded that Amit Shah be disqualified from Rajya Sabha. (File)

Alleging non-disclosure of Rs 25 crore worth liabilities in his election affidavit, the Congress on Monday approached the Election Commission against BJP president Amit Shah with a plea seeking his disqualification as a Rajya Sabha member and registration of a case.

A delegation of senior Congress leaders Kapil Sibal, Abhishek Singhvi and Vivek Tankha met Chief Election Commissioner Om Prakash Rawat in Delhi and handed over a memorandum to him.

The BJP has rejected the Congress charges as "bogus" and has said there is no violation of rules by Shah, who was elected to Rajya Sabha from Gujarat last year.

The Congress leaders alleged Mr Shah has violated rules and was liable for action by not disclosing these liabilities in his affidavit filed before the Election Commission while contesting the Rajya Sabha election.

They alleged that Mr Shah had taken a loan of Rs 25 crore while mortgaging a piece of land owned by him but it was not mentioned in the 'liabilities' section in the affidavit.

"The act of wilful non-disclosure by the Member of Parliament in his affidavit amounts to the offence of 'filing of false affidavit' under Section 125A of the Representation of the People Act, 1951. Such an offence is punishable by up to 6 months imprisonment, or with fine, or with both," the memorandum said.

The Congress leaders said it is clear the offence is not a minor one and is "a serious act of corruption through wilful and deliberate suppression".

Mr Sibal said the Election Commission of India must take immediate note of this and initiate appropriate proceedings to suspend the membership of Amit Shah to the Upper House with immediate effect.

He said the EC should also communicate to the Deputy Chairman of Rajya Sabha to start the procedure laid down under the relevant rules to determine what further penalties may be imposed for breach of privilege.

Asked about the EC asking the petitioner to move court in this case, he said, "We want that the EC should move court since the affidavit has been filed before it."

"The ECI must initiate proceedings against Mr Amit Shah for the filing of a false affidavit, which attracts up to six months' imprisonment, and/or a fine. We hope the Commission treats this matter with the attention that it deserves and initiates immediate action to take the issue forward," the memorandum by the Congress leaders said.

Mr Singhvi said it is a "very serious matter" as the Supreme Court has held that the requirement to disclose all assets and liabilities is mandatory and any evasion or suppression is absolutely not permissible.

"This has two serious consequences. One consequence is criminal... Secondly and separately, Rajya Sabha and its Chairman can and should take cognisance of this and it can lead to his suspension and disqualification," Singhvi told reporters.

"It is a clear-cut case which requires no argument that something which he has mortgaged to a bank, but he on his own simply is not disclosing," he said.

Citing Section 75A of the Representation of Peoples Act 1951, he said it mandates all MPs to file an affidavit declaring their criminal records (if any), their assets and liabilities and educational qualifications.

"This mandatory requirement is further elaborated upon in the Members of Rajya Sabha (Declaration Of Assets And Liabilities) Rules, 2004 made under the aforementioned Section 75A of the 1951 Act. Rule 3(1) (ii) of the 2004 Rules expressly includes 'his liabilities to any public financial institution'," he said.