Kerala police informed the High Court last month that the bishop had repeatedly raped the nun for almost two years.

The Kerala police today decided to summon a Jalandhar bishop, Franco Mulakkal, accused of raping a nun for questioning amid pressure from the activists and civil society groups. The decision was taken after a marathon six-hour meeting, news agency PTI reported.

The bishop was not arrested even after the Kerala police informed the High Court last month that the bishop had repeatedly raped the nun for almost two years between May 2014 and September 2016. The nun alleged she was sexually abused 13 times.

Here are the updates in the Kerala nun rape case:

Kerala nun rape case: Missionaries of Jesus constitutes inquiry commission, & expresses doubts about the authenticity of the complaint filed by the nuns. The Inquiry commission will also probe the sources of revenue of the nuns who are protesting.

Sep 12, 2018 19:40 (IST)
Inspector General Vijay Sakre told media, "There are lots of contradictions in the case on the part of everyone -- the complainant, the accused and the witnesses. This is an old case and is based primarily on oral statements. It is very difficult to gather scientific and technical evidence. We have to ensure that contradictions are ironed out suitably. As part of that process, Bishop Franco has been summoned to appear before the investigating officer on September 19 and notice for the same has already been sent".
Sep 12, 2018 19:27 (IST)

I feel that all that has happened&transpired by Jalandhar Bishop has damaged image of the Church. In the best interest of the Church, it would be advisable for him to step down&impartial inquiry to be conducted:Fr Nigel Barret, Spox to Archbishop of Mumbai on Kerala nun rape case pic.twitter.com/hQkS35OU1G

Sep 12, 2018 18:58 (IST)
The nun's petition to the Vatican
The nun had petitioned the Vatican alleging that the bishop was using "political and money power" to bury the case.
The nun alleges that by continuing in the position of Jalandhar diocese Bishop, Franco Mulakkal and his close associates "are using the wealth of the diocese" to divert the course of the police investigation.
"Seeking your urgent intervention in this case as the representative of the Holy See in India," she says in a letter to Giambattista Diquattro, Vatican's Apostolic Nuncio (a diplomatic mission) written on Saturday.
Sep 12, 2018 18:38 (IST)
Police sources have blamed the Kerala flood crisis for the delay and said the investigations were "going in the best manner possible" and all steps had been taken to protect the nuns.
Sep 12, 2018 18:21 (IST)
Four nuns, who support the complainant, joined protests near the Kerala High Court in Kochi. The nuns and others are protesting in Kerala against the delay in action against the bishop.'
The Missionaries of Jesus Congregation - that backs Bishop Franco Mulakkal - hit out at the protesting nuns today, saying it would approach the Kerala police chief  to probe what they call is a conspiracy by external forces against the church and the bishop.
Sep 12, 2018 18:09 (IST)
PC George, an independent lawmaker, made a shocking comment about the nun who alleged rape by Bishop Franco Mullackal. In an interaction with media he questioned the character of the nun and called her a prostitute.
"Is there any doubt that the nun is a prostitute? 12 times it was pleasure, 13th time it became a rape? Where was she when it happened 12 times? Whom is she telling this to? Why did she not complain on the first time it happened?... Let the three sisters be examined. Let us see if they are holy," he said.
Sep 12, 2018 17:51 (IST)
Read story for background to the case: 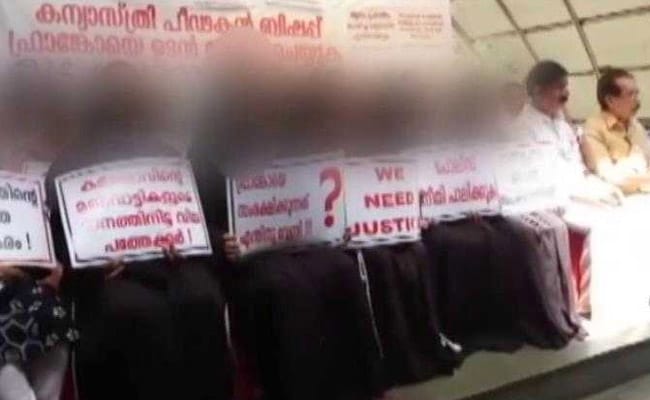 Sep 12, 2018 17:47 (IST)
Four nuns, who support the complainant, joined protests near the Kerala High Court in Kochi. The nuns and others are protesting in Kerala against the delay in action against the bishop. Protests are also taking place in Jalandhar.
Sep 12, 2018 17:46 (IST)
The decision was taken after a marathon six-hour meeting. Jalandhar bishop Franco Mulakkal will be questioned on September 19. There have been calls from all quarters for the Bishop's arrest.
Kerala PoliceKerala Nun Rape CaseHigh Court

Second Wave Of COVID Can't Be Ruled Out In Winters: Expert Panel Chief