Out of 65,000 government primary schools in Maharashtra, over 47,000 have gone digital without government funding 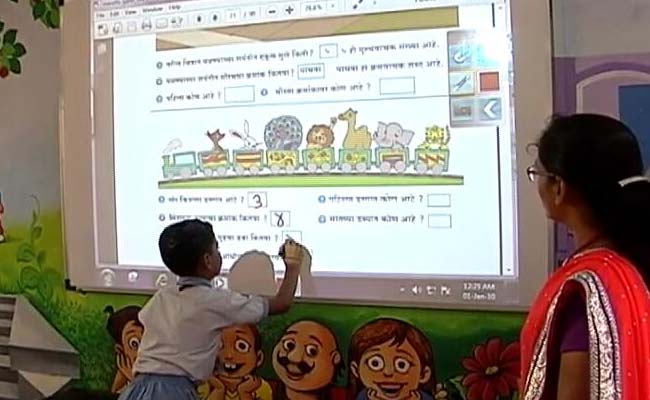 Tablets have replaced textbooks and students use an interactive projector instead of a blackboard.

Maharashtra: At the Zilla Parishad primary school in Maharashtra's Vadgaon Gund, about 200 kilometres from Mumbai, tablets have replaced textbooks and students now use an interactive projector instead of a blackboard. About 20 students per class, from Class 1 to 4 study here. What makes it more interesting is the fact that the digitisation has been completely funded by the citizens of the state.

As the Maharashtra government is trying to establish as many digital classrooms possible, citizens, too, are joining in to make this dream a reality. Out of 65,000 government primary schools in Maharashtra, over 47,000 have gone digital without government funding spread out across Maharashtra.

Nine-year-old Diksha Balulanke, a Class 4 student, has the whole syllabus available on her tablet. She likes to solve math problems on it. Technology is an alien concept for her parents who are farmers, but Diksha is already a tech champ.

"For over a year now, we have been using tablets. Besides studying, we also like to play games related to math, English, sciences. Technology has definitely made classes more interesting," said Diksha.

Even though it's only been a year since the Vadgaon school went digital, the initiative began seven years ago by Sandeep Gund, a teacher. After the model got success in its first school in 2009 in Thane district, teachers from government schools in the state volunteered to get trained in emulate the concept in their respective villages. Soon they starting receiving funds from many individuals across the state and smart solutions were implemented using that money.

"We have accepted anything from Rs 500 to Rs 3 lakh as donations. Depending on the funds received, we come up with ways to digitise the schools," said Mr Gund.

The Vadgaon school received about Rs 3 lakh which was enough to buy tablets, that are solar charged, for all the students and an Xbox containing an interactive syllabus. Their attendance is marked using access cards.

Promoted
Listen to the latest songs, only on JioSaavn.com
"Digital education gives the kids an edge over others and helps them stay ahead," said Dr Ajit Lanke, whose son studies at the school.