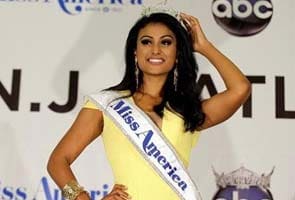 Atlantic City: The first Miss America pageant winner of Indian heritage was cheered by family members halfway around the world.

Nina Davuluri's grandmother told The Associated Press that she cried when she saw the news on television.

"I am very, very, happy for the girl. It was her dream and it was fulfilled," 89-year-old Vege Koteshwaramma said by phone from her home in the city of Vijaywada, in the southern Indian state of Andhra Pradesh.

The 24-year-old Davuluri , a US native, will begin the first day of her reign Monday the same way most of her predecessors did - with a frolic in the Atlantic City surf. She will also speak at a news conference about Sunday's win.

Davuluri wants to be a doctor and is applying to medical school, with the help of a $50,000 scholarship she won as part of the pageant title.

Koteshwaramma said there are numerous doctors in the family, both in the US and India, and that if her granddaughter wants to become one, "I am sure she will do it."

Asked about her granddaughter appearing in a bikini, given the conservative attitudes about such things in India, Koteshwaramma said: "I haven't seen any such thing. This must be all part of the competition."

Moments after winning, Davuluri described how delighted she is that the nearly century-old pageant sees beauty and talent of all kinds.

"I'm so happy this organization has embraced diversity," she said in her first news conference after winning the crown. "I'm thankful there are children watching at home who can finally relate to a new Miss America."

Davuluri's victory led to some negative comments on Twitter from users upset that someone of Indian heritage had won the pageant. She brushed those aside.

Promoted
Listen to the latest songs, only on JioSaavn.com
"I have to rise above that," she said. "I always viewed myself as first and foremost American."