In Flood-Ravaged Assam, How People Are Coping In Relief Camps

There are 226 relief camps and over 560 relief distribution centres in Assam.

Over 4,600 villages have been inundated in Assam, forcing people to move to relief camps.

Nearly 52 lakh people have been affected and 1.5 lakh shifted to relief camps in Assam over the last one week due to floods triggered by incessant rain. So far, 20 people have lost their lives, five just today, with 4,600 villages inundated.

The state government has issued a red alert as 30 of Assam's 33 districts are affected by flood waters and 11 rivers, including Brahmaputra, are flowing above danger levels.

The National Disaster Response Force or NDRF and the Army have been carrying out rescue operations. In a dramatic midnight operation last week, the Army had rescued 500 people from a village in Assam's Namati district, 100 kilometres from Guwahati.

These 500 people have been moved to a relief camp in Namati. At the relief camp, Junu Rajbongshi, 36, is busy feeding her three-year-old child. Her husband has gone to see if anything can be salvaged at their home. "We don't know how long we have to be here. There is not enough food for us or the kids. Because of the floods, the livelihood of people is at stake," she told NDTV. 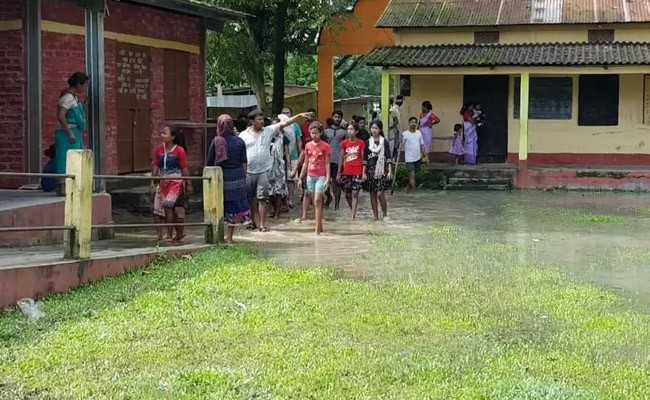 Thirty of Assam's 33 districts have been hit by floods.

The children are eager to get back to their schools. "I am a Class 6 student. I wish to go back to school but my book have been washed away in the flood," a child at the camp said.

There is an acute shortage of drinking water at these relief camps. Sanitation remains a major concern, especially at a time when Assam is dealing with an outbreak of Japanese Encephalitis.

People at relief camps say officials have asked them to add bleaching powder to make the water safe for consumption.

"We have been provided with bleaching powder to make water fit for consumption," Namati village president Anjna Talukdar told NDTV.

There are 226 relief camps and over 560 relief distribution centres in Assam. The centre sanctioned Rs 251 crores for the flood-hit state today.