Meira Kumar, who had tried to turn the race to Rashtrapati Bhavan into a battle for ideology and not individuals, received 3.67 lakh votes out of 10.69 valid votes polled. 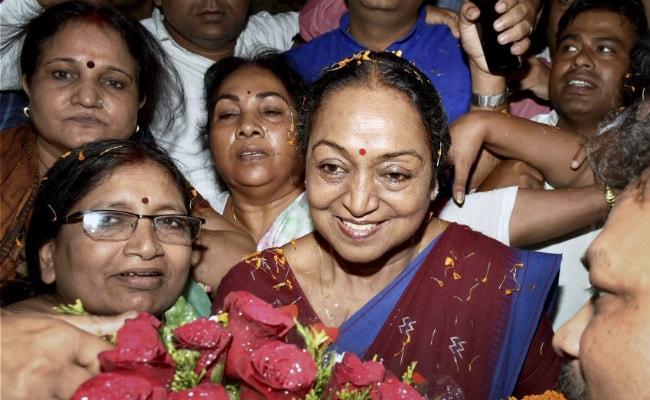 New Delhi: The BJP has called the NDA's candidate Ram Nath Kovind's win in the presidential election a truly historic win. But the former governor who will become the country's second Dalit President may not be the only one setting records. Meira Kumar, the joint opposition's candidate, too has created one; she polled the highest votes by a losing candidate.

Ms Kumar, who had tried to turn the race to Rashtrapati Bhavan into a battle for ideology and not individuals, received 3.67 lakh votes out of 10.69 lakh valid votes polled. The last candidate who came close was a former Chief Justice of India Koka Subba Rao who contested the 1967 election as a candidate of united opposition parties.

Justice Rao had resigned from the judiciary to contest the election, lost to Zakir Hussain but secured a record 3.63 lakh votes. It was an unbeaten record for 50 years.

Justice Rao's second record, however, is still intact. He had polled 43 per cent of the vote share, the highest so far. At 34 per cent, Ms Kumar lags by about 10 percentage points.

Congress leaders also pointed to the NDA candidate's about 66 per cent vote share, less than the 70 per cent that senior BJP leaders had claimed for Mr Kovind. It was also pointed that nearly half a dozen Presidents were elected with more votes than the NDA's candidate. Tucked in this point was a rebuttal to the BJP's claim of a historic win. "It is an eye-opener for those who are arrogating only based upon numbers," the Congress' Randeep Surjewala said.

The former Lok Sabha Speaker who knew from the start that she didn't have the numbers on her side, had pitched the election as a battle for ideology and asked lawmakers to vote according to their conscience, not party line.

Minutes after she predictably lost the election, Meira Kumar came out of her south Delhi residence to declare that her battle would continue. She also congratulated President-elect Ram Nath Kovind and cautioned him of the challenge ahead; to uphold the Constitution "in these most challenging times."

Promoted
Listen to the latest songs, only on JioSaavn.com
In her congratulatory message, Congress president Sonia Gandhi too reminded Mr Kovind that the President was also the "conscience keeper of the Constitution."

"The President of India enjoys a unique position as defender and protector of the Constitution, upholder of democratic traditions and as supreme commander of the Indian Armed Forces," she said.