The Citizenship (Amendment) Bill, or CAB, that was cleared by the Union Cabinet on Wednesday, will be tabled in parliament on Monday. Among the provisions that have been proposed is one that allows the government to cancel registrations of Overseas Citizen of India (OCI) cardholders who violate provisions of the Citizenship Act, "or any other notified law". The draft version of the bill also exempts parts of the Northeast, which has witnessed widespread protests, and will make it easier for non-Muslim refugees from Pakistan, Bangladesh and Afghanistan to become Indian citizens.

Should it be passed, the CAB will become the first bill under which nationality will be granted on the basis of religion. An earlier version had been passed by the Lok Sabha in January but lapsed after it stalled in the Rajya Sabha.

The draft bill, a copy of which is with NDTV, says: "It (the Citizenship (Amendment) Bill) will also enable the Government to cancel the registration as (of) Overseas Citizen of India (OCI) Cardholder in case of violations of the provisions of the Citizenship Act or any other notified law".

It also states: "However, such a punitive action would be preceded by an opportunity of being heard to be granted to the foreigner concerned... Cancellation of registration as OCI Cardholder for violations as mentioned above will be widely publicized".

Opposition parties have fought the bill, contending that, among other things, it discriminates against Muslims. They protested vociferously in parliament on Wednesday, with the Congress's Shashi Tharoor calling it "fundamentally unconstitutional" and Trinamool Congress leader Derek O'Brien hitting out at the ruling BJP for "cheap and narrow" political gains.

In principle the bill amends the 1955 Citizenship Act that says individuals looking to gain citizenship must have lived in the country for 12 months prior to application and for 11 of the last 14 years; if passed it will reduce the latter to 6 years for non-Muslim applications from the three countries.

It states: "any person belonging to Hindu, Sikh, Buddhist, Jain, Parsi or Christian community from Afghanistan, Bangladesh or Pakistan, who entered into India on or before the 31st day of December, 2014... who was forced or compelled to seek shelter in India due to persecution on grounds of religion or fear of such persecution..." can apply for Indian citizenship.

Union Minister Prakash Javadekar, in a cabinet briefing, said the centre had taken care of the interests of everyone and that "people will welcome it as it is in the interest of the nation".

The Citizenship (Amendment) Bill also exempts parts of the Northeast, which witnessed widespread protests over it last year. Shortly before the Prime Minister Narendra Modi-led Cabinet cleared it Home Minister Amit Shah held a series of meetings with political leaders and civil society members and organisations from the Northeast to address their concerns. 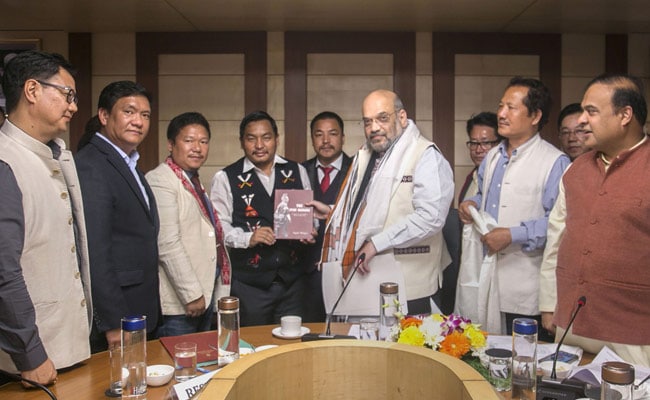 The draft bill now states: "Nothing in this section will apply to tribal areas of Assam, Meghalaya, Mizoram and Tripura as included in the Sixth Schedule to the Constitution and the area covered under "The Inner Line" notified under the Bengal Eastern Frontier Regulation, 1873".

Under the Sixth Schedule autonomous councils and districts were created in tribal areas in Assam, Meghalaya and Tripura, while Inner Line Permits are required for citizens from other states when they visit Arunachal Pradesh, Mizoram, and Nagaland.

The draft Citizenship (Amendment) Bill is likely to pass Lok Sabha unimpeded; the ruling BJP has a massive majority in the Lower House and Union Minister Rajnath Singh, on Tuesday, asked party MPs to be present in large numbers. Mr Singh called it as important as the bill that withdrew special privileges to the former state of Jammu and Kashmir under Article 370.

The bill's passage through the Rajya Sabha could be difficult, given how steadfastly some opposition parties have fought it. However, the BJP has cleared controversial bills through the Upper House in the past, with help from the BJD, the TRS and YSR Congress.

The Citizenship (Amendment) Bill was an election promise of the BJP in the 2014 and 2019 Lok Sabha polls.