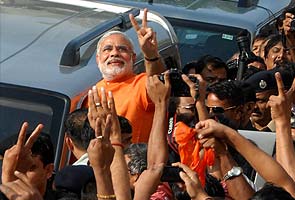 Ahmedabad: After European Union ended over a decade-long boycott of Narendra Modi, lawmakers from the region have invited him to attend the European Parliament in Brussels in November, according to a post on the Gujarat Chief Minister's blog.

The Chief Minister yesterday had an online interaction with the European lawmakers who were attending the 10th corporate culture and spirituality India conference in Bangalore, according to the blog post.

According to the post, during the interaction, Mr Modi highlighted various initiatives taken by the Gujarat government for environment protection. He told them that Gujarat is the first state in India and among the four states in the world to have a separate department on climate change.

Briefing the lawmakers about Gujarat's advances in solar energy, Mr Modi told them about Asia's largest solar park in Charanka in Patan district and about state government's roof-top solar policy.

The post also spoke of Gujarat's work in other forms of renewable energy, including wind energy.

Mr Modi also said that Gujarat is working on a Rama trail from Gujarat to Sri Lanka and proposed a similar Buddha trail from Sri Lanka to Gujarat. Nirj Deva, member of the European Parliament and politician of Britain's Conservative Party, said he will talk to Sri Lankan President on the issue.

The Chief Minister also said Gujarat and Russia enjoy very old relations and that the Astrakhan province, which had sent a delegation to attend the Vibrant Gujarat Summit 2013, is a sister state to Gujarat.

Among those, with whom Modi interacted yesterday, were - Joe Leinen, German politician and member of the European Parliament who heads the Committee on Environment, Public Health and Food Safety in the Parliament; Nirj Deva; Anne Marie Lizin, honorary president of the Belgian Senate;
Vladislav Yurchik, leader of Communist Party of Russia and Deputy of the Russian Parliament 'Duma' and Valery Sargienko, member of Siberia's Legislative Assembly and leader of the Communist Party.

Promoted
Listen to the latest songs, only on JioSaavn.com
Mr Modi had a luncheon meeting with envoys and representatives of several European Union member countries in Delhi on January 7 that was hosted by German Ambassador Michael Steiner, ending their boycott of the chief minister since the 2002 post-Godhra riots.

Yesterday's interaction was also attended by spiritual leader and Art of Living founder Sri Sri Ravi Shankar who said Gujarat has progressed immensely and there was peace and progress under Mr Modi's leadership.
Comments
Narendra Modi