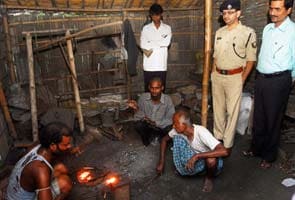 Muzaffarpur: Blacksmith Sunil Thakur had never felt as important in his life as he did on Nov. 4, when the district police chief, an executive magistrate and a posse of junior officials visited his makeshift roadside furnace.

They handed him six country-made pistols, known as kattas, and asked him to transform them into farm and gardening tools. As a crowd assembled, the blacksmith heated the guns, and then hammered the red-hot metal for nearly an hour, shaping them into a hoe, a clipper, a sickle and a shovel.

This transformation of guns into tools in Muzaffarpur, about 50 miles from Bihar's capital of Patna, was the first in a state-wide police initiative aimed at reducing the number of guns in crime-ridden Bihar. According to the National Crime Records Bureau, 3,362 people were killed in violent crimes, defined as murder either by guns, knives or during robbery, in Bihar last year. This makes it India's second-most crime-prone state after Uttar Pradesh, which tops the list with 4,456 cases.

The state's new Director General of police, Abhayanand, who goes by just one name, is behind the initiative and a slew of larger reforms he hopes will re-establish the rule of law in Bihar.

Since he took the job in August, Mr. Abhayanand has also pushed for speedy trials in fast-track courts and appointed retired army personnel as special auxiliary police forces. His force is seizing property bought by members of the mafia using fake names. If details on the sale deed are found to be fraudulent, property will be claimed as a government asset after a six-month wait. Police say the move will help check corruption.

At present, more than 60,000 illegal firearms, stored in police stations across Bihar, are lined up to be melted and made into farming or agricultural tools. "The seized illegal weapons in store at police stations are of no use once the case is over. They stink like dead bodies," Mr. Abhayanand said in an interview in the modest living room of his sprawling ancestral home.

Mr. Abhayanand said the Bihar police manual gave him the idea to transform these weapons. Bihar courts, under section 452 of the national criminal procedure code, 1973, can order the destruction of seized weapons once the trial is over.

"This provision made me think of converting thousands of seized weapons, lying in over 800 police stations in Bihar, into something constructive," Mr. Abhayanand said with a smile. Bihar police seize about 60,000 weapons every year.

Before a gun can be melted down, there is plenty of paperwork. The district police have to acknowledge that the case a weapon is associated with is closed, then verify details of the arms seized from court records; and finally get a court order to destroy the weapon. The melting is carried out in front of an executive magistrate and a videographer, to produce documentary evidence.

By destroying seized firearms, police say they can ward off allegations of planted evidence. Police are regularly accused of falsely implicating people by planting weapons, kept in malkhanas, or storehouses, at police stations, which were not with the criminal at the time of arrest.

The destruction of these weapons will ensure that such allegations can no longer be made, Bihar police say.

Responses to the initiative have been mixed so far. Satish Kumar, who owns a vast tract of agricultural land in Punpun of Patna district, dismisses the move as "impractical and publicist."

Promoted
Listen to the latest songs, only on JioSaavn.com
"It smacks of positive symbolism but doesn't sound practically feasible. It will require a sustained effort from the overburdened and staff-starved Bihar police to turn the weapons into farming tools", said Mr. Kumar, an engineer-turned-farmer.

But his neighbour, Sudhir Sharma, also a farmer, thinks otherwise. "We will be able to get our farming tools at cheaper rates and it will also help providing more work to local village toolmakers," he said.
Comments
Firearms made into farm toolsGuns turned into farm tools in Bihar