If I Were a Dictator, Would Introduce Gita in Class 1: Supreme Court Judge 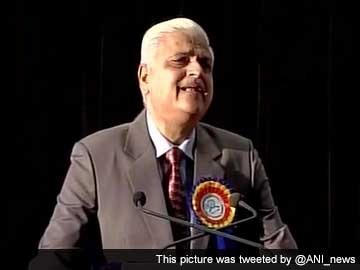 Ahmedabad: Supreme Court judge Justice AR Dave on Saturday said that Indians should revert to their ancient traditions, and texts such as Mahabharata and Bhagwad Gita should be introduced to children at an early age.

"Our old tradition such as 'Guru Shishya parampara' is lost, if it had been there, we would not have had all these problems (violence and terrorism) in our country," Justice Dave said while speaking at an international conference on 'contemporary issues and challenges of human rights in the era of globalisation' in Ahmedabad.

"Now we see terrorism in countries. Most of the countries are democratic....If everybody in a democratic country is good then they would naturally elect somebody who is very good. And that person will never think of damaging anybody else," he said.

"So by bringing (out) all the good things in each and every human being, we can stop the violence everywhere. And for that purpose we have to go back to our own things again."

The conference had been organised by Gujarat Law Society (GLS).

The judge also proposed that Bhagwad Gita and Mahabharata should be introduced to students from the first standard.

"Somebody who is very secular... so called secular will not agree... Had I been the dictator of India, I would have introduced Gita and Mahabharata in class one. That is the way you learn how to live life. I am sorry If somebody says I am secular or I am not secular. But if there is something good, we have to get it from anywhere," Justice Dave said.

Chief justice of the Bombay High Court, Justice Mohit Shah, said 'development for all' should be the core value behind the idea of globalisation.

"The concept of global village does not mean everybody just thinking of the world, but it should also be expanding of functions of development for all....If we don't share the profits of globalisation, the benefits of globalisation, it would be raising serious challenges," he said.
Promoted
Listen to the latest songs, only on JioSaavn.com
Comments
Supreme CourtJustice AR DaveBhagwad Gita