I don't regret my comments on Modi govt: Deoband chief 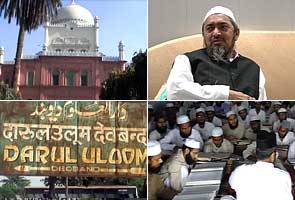 New Delhi: The newly-elected head of noted Islamic seminary Darul-ul-Loom, Deoband, Maulana Ghulam Mohammad Vastanvi, has decided to resign from his post next month after protests by students over his remarks on Gujarat Chief Minister Narendra Modi.

He says he felt obliged to resign, but adds that there was no pressure for his resignation and that he has no regrets for his comments.

Vastanvi, who hails from Surat in Gujarat and was elected as the Vice Chancellor on January 10, was facing protests from students at the seminary over his remarks allegedly praising the Gujarat Chief Minister. However, he insists that his statement was not in praise of Modi but on the progress of Gujarat.

"The people of Gujarat favour Modi because of the development he is responsible for. There is most certainly development happening in Gujarat and Hindus and Muslims are both living side by side in the state. In my statement, I never meant that I had forgiven Modi or that Modi is a good person. Whatever he did, the world hasn't forgiven him then who am I to say anything and say 'Modi clean chit'," he said.

Vastanvi's decision to resign barely two weeks after taking over has left some at the seminary disappointed.

"It is most unfortunate that he was not allowed to work in the institution, which could have benefited with his resources and experience," the seminary's deputy head Maulana Abdul Khaliq Madrasi told PTI.

"The statement for which Vastanvi is being attacked was not in praise of Modi but on the progress of Gujarat which is also being cited in newspapers and whatever he had said was not in the capacity as the head of the seminary but as the resident of Gujarat," he said.

But despite support from some quarters, Vastanvi, an MBA graduate and a businessman running several education institutes says he felt obliged to resign.

"The seminary is larger than me and with the animosity from the students, I felt it was best to resign." (With PTI Inputs)
Comments
Deoband chiefNarendra ModiGujarat CMGujarat riots