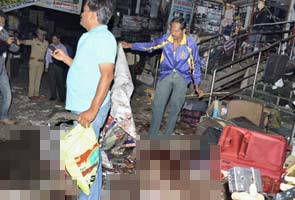 Hyderabad: The Andhra Pradesh police has released sketches of a bicycle used in the twin bomb blasts in Dilsukhnagar in Hyderabad last month which killed 17 and injured more than 100 people.

Since the rear portion of the bicycle is totally damaged and only its front portion is available, it can be concluded that the explosive had been fixed on the bicycle's carriage, Mr Rao said.

The bicycle's damaged parts found in front of Anand Tiffin Centre at Konark Theatre revealed that it was assembled with parts of bicycles manufactured by different companies, he said.

The bicycle's main frame, handle bar, bumpers and fork belong to Atlas company, while the front rim was manufactured by Usha, he said.

Giving further details of the bicycle, he said that the front tyre was manufactured by a company called Ganga in April last year, while its front tube is from Gamra (Ganga) which was manufactured in October last year.

The bicycle's chain was a heavy duty 'KW', made in England. It was learnt that this product was available in the market three years ago, but became unavailable later, due to its high cost, Mr Rao said.

It was presumed that offenders behind the blasts might have taken shelter in rented houses for about one or two months before the blast on February 21, he said.

A thorough examination revealed that the bicycle's upper and bottom fork cups were replaced recently with 'BM'-make cups and these were not fixed properly, probably due to lack of expertise, he said.

Appealing to the public, especially second-hand bicycle vendors and housing rental agents to pass on information to help cops solve the case, the police commissioner said that suitable reward would be given to the informant, keeping his or her identity strictly confidential.

He said that the bicycles might have been purchased a week before the blasts.

He also said that those who provided information need not get scared, since they would be treated as witnesses and urged rental brokers and house owners to come forward to disclose information at this juncture of the investigation.

Promoted
Listen to the latest songs, only on JioSaavn.com
In the event of the offenders being arrested, those found to have concealed crucial information related to the blasts would face appropriate action, he said.

The police have already announced a reward of Rs 10 lakh for any information which could help solve the case.