Huge Damage to Property in Fire at Jaipur City Palace 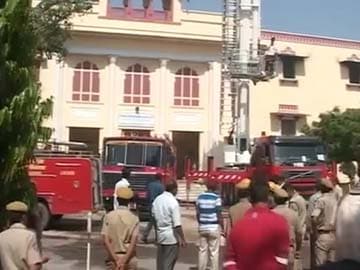 Jaipur: A fire broke out in the Friends of Museum complex at the Jaipur City Palace due to a short circuit.

Fire department officials said that the fire has been put off but reported a huge loss of property. No loss of life was reported in the incident.

The fire started from the office located on the first floor at around 8:45 in the morning and spread rapidly to art gallery due to the wooden furniture in the office.

"The fire damaged the office and some portion of the art gallery. Some items and paintings in the gallery have also been damaged," DCP (north) Ashok Gupta said.

12 fire tenders were pushed into service to douse off the flames that started in the administrative block.

Assessments are being done to estimate the cost of the fire.

"No antiques or heritage items were destroyed in the fire. Only office files and documents lying in the office were destroyed along with some artefacts from the friends of museum society which is housed on the ground floor of the building," Narendra Singh , a member of the Jaipur royal family said.

The City Palace was the seat of the Maharaja of Jaipur. One of its sections now houses a museum but the greater part of it is the residence of the members of the erstwhile royal family.

Promoted
Listen to the latest songs, only on JioSaavn.com
The Friends of Museum complex is a space within the city palace where artists and craftsmen display their skills and crafts.