The Counter Intelligence wing of the Punjab Police and the Border Security Force recovered 22 pistols, 44 magazines and 100 rounds of ammunition. 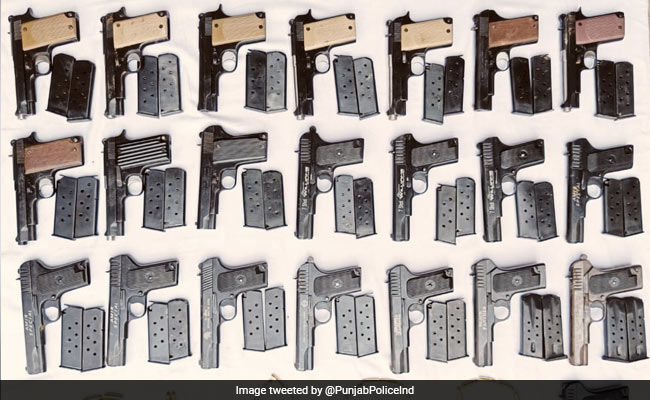 A huge cache of weapons recovered near the India-Pakistan border.

The Punjab Police and the Border Security Force (BSF) have recovered a huge cache of weapons near the India-Pakistan border in the Khemkaran area of Tarn Taran district, an official said today.

In a joint operation, the Counter Intelligence wing of the Punjab Police and the BSF recovered 22 pistols, 44 magazines and 100 rounds of ammunition, the police official said.

One kg of heroin was also recovered, he added

They were packed in a black kit bag concealed in a paddy field, the official said.

Officiating Director General of Police (DGP) Iqbal Preet Singh Sahota said police received secret information that a huge consignment of arms and heroin had been concealed, following which the Counter Intelligence wing in Amritsar was sent to the spot and a search operation was planned with the BSF authorities.

During the preliminary investigations, it has come to light that as "conceal and clear" has been the most practised modus operandi of Pakistani smugglers, this consignment was placed by them in Indian territory across the fence and it was supposed to be retrieved by their Indian associates, according to an official statement.

The DGP said a case under relevant sections of the Indian Penal Code (IPC), the Narcotic Drugs and Psychotropic Substances Act, the Arms Act and the Finance Act has been registered in Amritsar.

This is not the first time when anti-national elements have tried to push such consignments through various channels across the border.

In the past too, the Counter Intelligence wing had recovered from different accused a huge cache of illegal weapons meant to disturb the peace and harmony of the state.

In June this year, a consignment of foreign-made 48 pistols was recovered in Batala.