How the Mumbai sea link was built 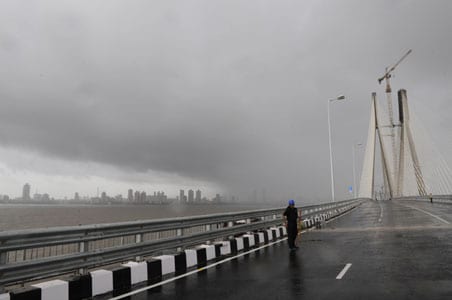 It took 46 years for the idea of a sea link to become a reality in Mumbai. Here's how the sea bridge was built.

The 5.6 km Bandra-Worli sea link bridge connects the northern suburb of Bandra to Worli in South Mumbai. Around 6000 people worked round the clock to construct the engineering marvel.

It is an eight-lane twin carriageway. It used 36,000 km of steel and 5,75,000 tonne concrete. The project used 500-metre-long cables. The cables are suspended from twin towers that are 126-metre high.

For the twin towers, smaller pipes were embedded in the sea bed, water was drained out and then concrete was pumped into them.

The approach bridges are built with pre-cast concrete segments weighing 130 metric tonnes each.

The concrete segments were placed between the two pillars by a gigantic instrument called launching trus. Industrial glue helped to stick the segments together. The segments are connected to each other by pre-tension wires. This was done at the Bandra end.

At the Worli end, a giant floating crane was brought in so the launching trus could move and align the segments from the Worli Side.

However, the crane needed deep sea levels to be able to function so work could happen only during high tide.