Gorkha Janmukti Morcha chief Bimal Gurung, the man spearheading the demand for a separate state in the hills, however, will not be part of the discussion 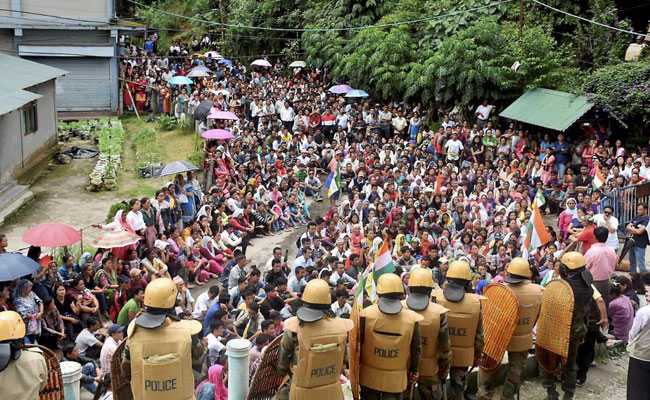 Amid shutdown, Mamata Banerjee has clarified that there will be no division of Bengal.

Kolkata: As the indefinite shutdown in Darjeeling entered its 77th day, leaders of some hill parties will be meeting West Bengal Chief Minister Mamata Banerjee today to discuss the way forward. The meeting will be held at Mamata Banerjee's office in Kolkata at 4 pm.

Gorkha Janmukti Morcha chief Bimal Gurung, the man spearheading the demand for a separate state in the hills, however, will not be part of the discussion. His colleague Benoy Tamang will lead the party's five-member delegation.

"We hope we will be able to find a solution to the Darjeeling crisis," Mr Tamang told reporters. The Gorkha National Liberation Front (GNLF), Jan Andolan Party (JAP) and the Akhil Bharatiya Gorkha League (ABGL) will also join the talks.

Mamata Banerjee wants to restore peace in the strife-hit region. After the GNLF requested for a dialogue to resolve the crisis caused by the shutdown, she agreed to meet the Gorkha leaders. She, however, made it clear that "there will be no division of Bengal; Darjeeling is an integral part of it".

Last week, the GJM expressed its willingness to attend today's talks abandoning its earlier stand of not holding any dialogue with the state government over the issue. The GJM had though reiterated that Gorkhaland was the only solution to the problems of the Gorkha community.

Amid reports of cracks in the GJM ahead of the crucial discussion, Gurung has also alleged that there is a conspiracy by some GJM leaders to frame him. In an audio message on Sunday night, he warned that if they discussed any other issue other than 'Gorkhaland' with the state government, then they would not be allowed to return to the hills.

In his message, he said, "There is a conspiracy by some hill leaders who are hand in glove with the state government. They are trying to frame me and are passing information to the police."

He added, "Some leaders have written letters to the state government without my permission. In the next 10-12 days, I will make their names public. The people of the hills will never forgive these traitors."

Promoted
Listen to the latest songs, only on JioSaavn.com
The protests, spearheaded by the GJM, had begun on June 8 over fears that the state government was trying to impose Bengali language in the hills and snowballed into demand for a separate state. The GJM took out rallies in various parts of the hills, demanded immediate withdrawal of police forces from Darjeeling and raised slogans in support of Gorkhaland.