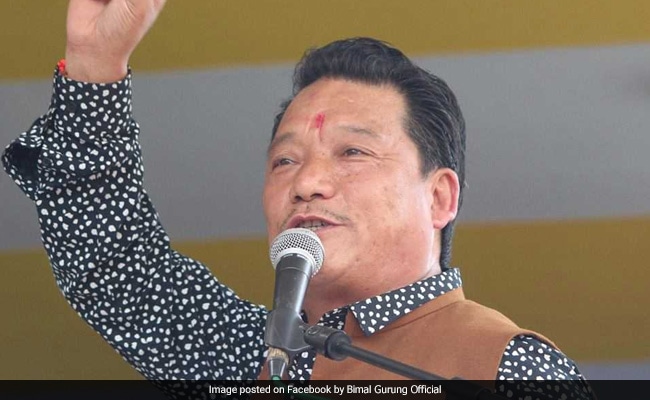 The GJM leadership, however, asserted that it would press for the "one-point agenda of creation of separate state of Gorkhaland" in the September 12 all-party meeting convened by the state government in agitation-hit north Bengal.

"Sikkim Chief Minister Pawan Kumar Chamling has been patronising and giving protection to Bimal Gurung. Yesterday (on Friday), Bengal Police went there to arrest a person (Mr Gurung) who was accused of unlawful activities under the Unlawful Activities (Prevention) Act. Bengal Police had given prior intimation to the Sikkim Police," Goutam Deb said on Saturday.

"Instead, Gurung was cordoned by the Sikkim Police and allowed to flee. It was unfortunate. We strongly condemn this. West Bengal government will take steps according to the Constitution," Mr Deb said.

The Trinamool Congress leader's comments come a day after West Bengal Police arrested at least nine GJM leaders during a raid in south Sikkim's Namchi on Friday where the party had held its central committee meeting during the day.

"There is credible source of information and input that several accused wanted....who are absconding, are available under your jurisdiction. Kindly render necessary police assistance during raid under your jurisdiction to apprehend Bimal Gurung, Prakash Gurung, D.K. Pradhan and others...," Mr Prasad said in the letter, a copy of which is with IANS.

However, Sikkim police has said its Bengal counterparts "did not produce any documents" which led them to "prevent the arrests".

"It's not that we did not help them... they did not produce any documents, neither did they have arrest warrants nor any FIR copy. A case was registered against Bengal Police," said an official from Namchi police station.

"Chamling had sent letter to the Central government supporting GJM's demand for separate state of Gokhaland and in view of that resolutions were taken twice in the Sikkim Assembly earlier," he said.

Mr Deb also reminded Bengal is the lifeline of Sikkim and it protects the small Himalayan state.

The West Bengal Police's CID on Friday issued look out notices against three GJM leaders, including Mr Gurung, as tension mounted in the northern West Bengal hills following a rift within the Morcha leadership over temporary withdrawal of the indefinite shutdown in the region.

At its central committee meeting in Sikkim on Friday, the GJM expelled its Joint Secretary Binay Tamang and senior party leader Anit Thapa, accusing them of conspiring to derail the Gorkhaland movement.

At the conclusion of the meeting, the party leadership said some of the GJM leaders would be present at the September 12 all-party meeting convened by the state government in north Bengal.

The party on Saturday reiterated its stand but underlined the delegation attending the meeting will "discuss the one-point agenda of creation of separate state of Gorkhaland".

"The names of delegation members who will attend the meeting will be announced soon. All the members present unanimously agreed that the delegation attending the meeting will discuss the one-point agenda of creation of separate state of Gorkhaland," the party said in a statement.

Promoted
Listen to the latest songs, only on JioSaavn.com
West Bengal Chief Minister Mamata Banerjee has decided to hold a second round of all-party meeting in the north Bengal branch of state Secretariat -- Uttarkanya -- after finding the first leg of meeting in Kolkata "satisfactory".