"Honoured To Introduce You To My Family": PM To Trump At 'Howdy, Modi!'

'Howdy, Modi!': "His every word is followed by tens of millions. He was a household name and very popular even before he went on to occupy the highest office in this great country," Prime Minister Narendra Modi said of US President Donald Trump

Prime Minister Narendra Modi on Sunday greeted US President Donald Trump at the sold-out 'Howdy, Modi!' event in Houston with a long glowing introduction of the US leader. "His every word is followed by tens of millions. He was a household name and very popular even before he went on to occupy the highest office in this great country. From CEO to Commander-in-Chief, from boardrooms to the Oval Office, from studios to global stage, from politics to the economy and to security. He has left a deep and lasting impact everywhere. Today, he is here with us," PM Modi said, as a 50,000-strong audience cheered at Houston's NRG Football Stadium, one of the largest in the US.

"It is my honour and privilege to welcome him here in this magnificent stadium and magnificent gathering. And I can say, I had a chance to meet him often. And every time I found the friendliness, warmth, energy, the President of the United States of America, Mr Donald Trump," PM Modi said.

"...The words of candidate Trump, ab ki baar Trump sarkar, rang loud and clear and his celebration of Diwali in the White House lit up millions of faces with joy and appreciation. When I met him for the first time, he said to me, 'India has a true friend in White House'. Your presence here today is great testimony to that," PM Modi said.

"Mr President, you had introduced me to your family in 2017. And today, I have the honour to introduce you to my family. Over a billion Indians and people of Indian heritage around the globe, ladies and gentlemen, I present to you my friend, a friend of India, a great American President Mr Donald Trump," the Prime Minister said in his speech that began after nearly three hours of cultural programmes. 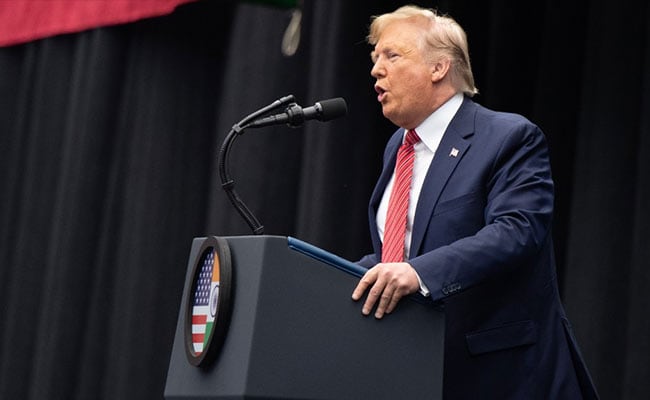 'Howdy, Modi!': US President Donald Trump said India and the US share a close people-to-people, trade and defence ties

The event gives PM Modi a chance to energise his relationship with Indian-Americans who are active political supporters.

President Trump, meanwhile, faces a largely foreign-born audience and he has a strong political reason for coming at the 'Howdy, Modi!' event, according to a report in The Washington Post. "Democrats are making a big play for Texas in 2020... The rally provides Trump with access to a potential pool of Indian American voters that could turn out to be critical in next year's presidential elections," the newspaper reported.

Houston is a rare Democratic stronghold in Republican-dominated Texas and serves as the economic anchor of a state that will be critical to President Trump's 2020 re-election bid. Polls show tepid support by Indian-American voters, some 75 per cent of whom voted for his Democratic rival, Hillary Clinton, in 2016.

But organisers of the "Howdy, Modi!" event that kicked off with a 90-minute cultural programme featuring 400 costumed dancers, say President Trump "is completely welcomed by the community".

"His presence is an indication of his support and endorsement of the strengthening of India's relations with America. This event is about strengthening those ties," news agency Reuters quoted the organiser Texas India Forum's spokesperson Preeti Dawra as saying.