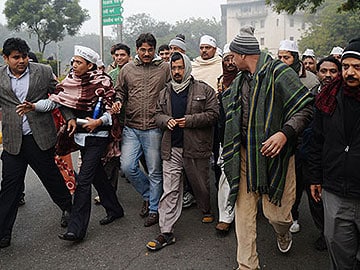 Arvind Kejriwal with supporters at the protest site in New Delhi

Mr Shinde referred to the 45-year-old as "veda" - a Marathi term that indicates "mad".

"Because of that veda Chief Minister's demonstration, I had to deploy thousands of policemen," Mr Shinde said about the former tax inspector who became Delhi's Chief Minister last month.

The Home Minister and the Delhi Police which reports to him were the twin targets of a demonstration that Mr Kejriwal staged in Delhi on Monday and Tuesday, grid-locking the heart of the capital. (Read)

Mr Kejriwal and other leaders from his Aam Aadmi Party (AAP) demanded the suspension of five police officers for alleged dereliction of duty; they also said the Delhi Police must be made to report to the state government and not the union Home Ministry, as it does currently.

The chilly temperatures in the capital were among a consortium of factors that contributed to a smaller-than-expected audience for Mr Kejriwal. That also emboldened the Home Minister to hold his ground. Finally, last evening, the chief minister called off his demonstration, claiming that "the victory was Delhi's" because two of the policemen he had targeted had been asked to proceed on paid leave.
Comments
Arvind KejriwalSushil Kumar Shinde