New Delhi: Syed Shahid Yousuf, the son of terror group Hizbul Mujahideen's chief Syed Salahuddin, has been arrested in Jammu and Kashmir by the National Investigation Agency (NIA) in a 2011 terror funding case.

Yousuf, 42, works in the state government as a village agriculture assistant and has a family home in Budgam.

"He was summoned for questioning to Delhi on Tuesday after initial rounds his role was conclusively established in the case and so we arrested him," NIA spokesperson Alok Mittal told NDTV.

The case involves funding through hawala channels by terrorists based in Pakistan and Saudi Arabia.

According to the top anti-terror agency, Yousuf was in touch with Saudi Arabia-based Hizbul Mujahideen terrorist Aijaz Ahmad Bhat and had received money to fund secessionist and terror activities in the Kashmir Valley. 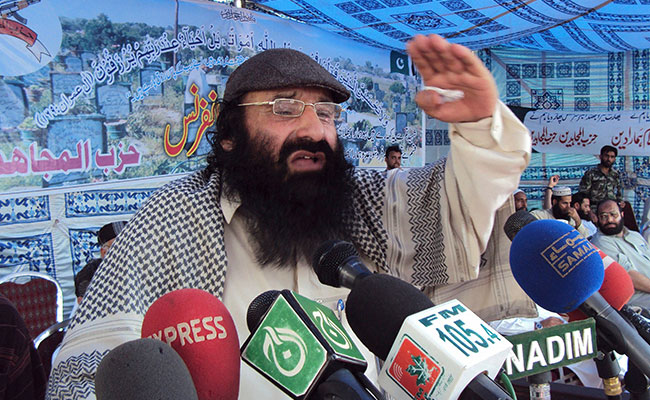 Syed Salahuddin is the head of terror group Hizbul Mujahideen

Sources say Yousuf accepted money transferred through Western Union by Aijaz, who is on the run, and investigators have documents from Saudi Arabia and India confirming the transfers.

The money allegedly meant to fund the Hizbul Mujahideen's terror activities in Jammu and Kashmir, was sent in four instalments to Yousuf between 2011 and 2014.

The NIA also has call records of multiple conversations between Aijaz and Yousuf.

"We have all the documents on money transfers as well as call details. It is on the basis of this irrefutable evidence that we have gone ahead with Yusuf's arrest," said a senior officer.

Four accused in the case are in Delhi's Tihar jail while two are missing.

The case had been dormant after the four arrests. The NIA revived the investigations recently and questioned Yousuf a few days ago.

Promoted
Listen to the latest songs, only on JioSaavn.com
Yesterday, the central government announced a new interlocutor, former Intelligence Bureau chief Dineshwar Sharma, for a "sustained dialogue" with all stakeholders in Jammu and Kashmir. Yousuf's arrest is a clear sign that the centre does not plan to go slow on its crackdown on separatist leaders.

Syed Salahuddin was in June declared a Specially Designated Global Terrorist by the US Department of State.