Last year, HAL had delivered the biggest ever cryogenic Liquid Hydrogen tank (C32-LH2) which is four metres in diameter and eight metres in length, much ahead of contractual schedule. 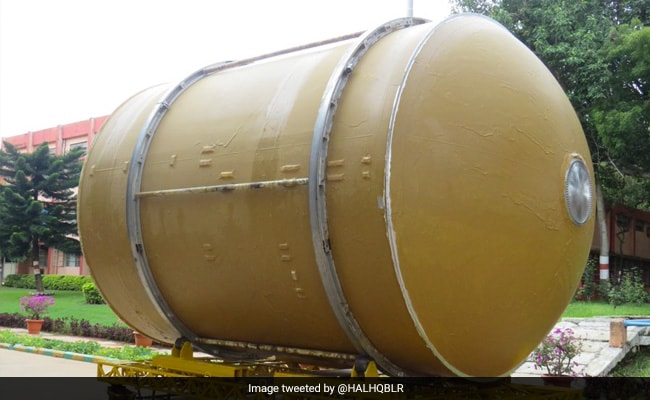 The semi cryo-liquid oxygen (LOX) tank - the first developmental welded hardware is a part of the SC120 stage, intended for payload enhancement by replacing the L110 stage in the existing Mk-III launch vehicle, the company said.

Last year, HAL had delivered the biggest ever cryogenic Liquid Hydrogen tank (C32-LH2) which is four metres in diameter and eight metres in length, much ahead of contractual schedule.

Stating that it has mastered the skills and technologies required for fabricating welded propellant tanks, HAL said, till date, its Aerospace Division has delivered 244 propellant tanks and 95 water tanks to ISRO for the space programmes of PSLV, GSLV Mk-II and GSLV Mk-III of diameter 2.1, 2.8 and 4 meters where the length of the tank varies from 2.5 metres to 8.0 metres.

As a strategic reliable partner HAL has been associating with ISRO for India's prestigious space programmes since the last five decades, and has delivered critical structures, tankages, satellite structures for the PSLV, GSLV-Mk II and GSLV-Mk III launch vehicles, it said in a release.

Various new projects like PS2/GS2 integration, Semi-cryo structure fabrication and manufacturing of cryo and semi-cryo engines are being taken up at HAL, for which installation and commissioning of unique infrastructures are nearing completion, it added.