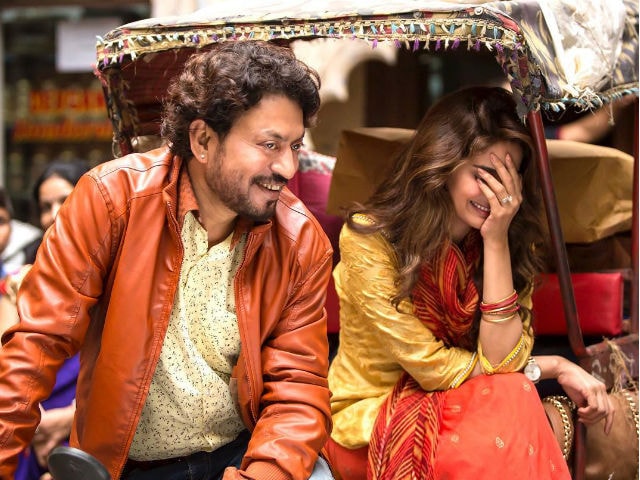 New Delhi: Actor Irrfan Khan's Hindi Medium, which opened in theatres on Friday, is performing well at the ticket window and the actor's reaction to the collection figure is priceless. Trade analyst Taran Adarsh shared that in four days Hindi Medium collected Rs 15.71 crore and Irrfan Khan tweeted: "Taalis, aasoons and seethis! Overwhelmed by the response to #HindiMedium (sic)" In fact, Hindi Medium collected more on Monday than on the opening day. Irrfan Khan co-stars with Pakistani actress Saba Qamar in the Saket Chaudhary-directed film. Hindi Medium is a critique on commercialization of the education system in India and the importance given to English language in India. Irrfan's film is made on a budget of Rs 22 crore and its number is growing due to positive word of mouth review.

Meanwhile, news agency IANS reports that Hindi Medium had already earned Rs 15 crore from digital, satellite, music and overseas rights. In Hindi Medium Irrfan and Saba's characters want to give their daughter the best education so that she may be accepted by the elite.

Hindi Medium released along with Arjun Kapoor and Shraddha Kapoor's Half Girlfriend, which is based on Chetan Bhagat's novel of the same name. Mohit Suri-directed Half Girlfriend is way ahead of Hindi Medium and has made Rs 37.15 crore so far.

Promoted
Listen to the latest songs, only on JioSaavn.com
Last week's releases Sarkar 3 and Meri Pyaari Bindu are nowhere in the race. However, S S Rajamouli's Baahubali: The Conclusion is still running successfully in the theatres.