Heavy Snow In Himachal Pradesh's Kufri, 170 Students Among Others Rescued

Himachal Pradesh Weather: The bus carrying the students from Maharashtra skidded at Fagu near Kufri around 8 pm while on their way to Manali that left them stranded in snowfall. 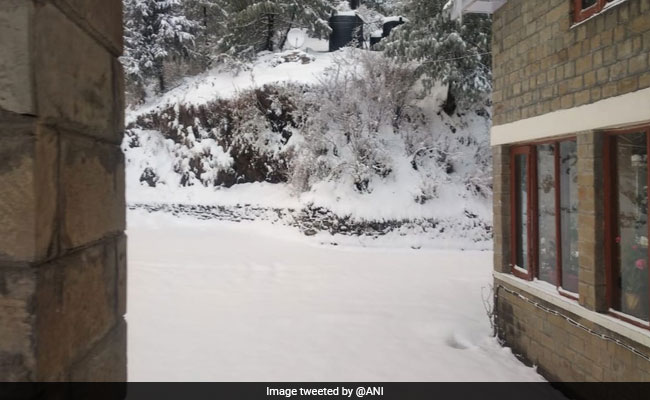 As many as 170 students who were stranded amid heavy snowfall near Kufri in Himachal Pradesh's Shimla were rescued early on Saturday, police said.

The 90 students from Maharashtra and 80 students from Rajasthan were on a tourist trip to the state but got stuck in snowfall near Kufri on Friday evening, Shimla Superintendent of Police Omapati Jamwal said.

The bus carrying the students from Maharashtra skidded at Fagu near Kufri around 8 pm while on their way to Manali that left them stranded in snowfall, the police officer said.

Dhalli SHO Rajkumar and his team rescued and took them to a safer place at a nearby resort where they are staying for now, the police official added.

While the SHO-headed team was coming back towards Hassan Valley after clearing Charrabara-Kufri section of the road in which 300 vehicles were stranded, the team found more than 80 light motor vehicles and two tourist buses stuck in snow accumulated on the road, Mr Jamwal said.

The tourist buses were at an isolated place around half-a-kilometre away from Hassan Valley carrying the students from Rajasthan including 35 girls, he added.

The district administration brought in a bulldozer to clear the snow with Naib Tehsildar Gezta coordinating the work throughout night following which the 80 students were escorted out in four vehicles, the cop informed.

Some members of the group are staying in a gurdwara in Chhota Shimla while the others are at Tribal Bhawan, he said.

They will leave once their buses reach their place and roads are cleared, he added.

In another incident, SP Jamwal said a vehicle was found stuck at an isolated place around 4 am on Saturday. The man in the vehicle was with his family and refused to leave the vehicle requesting for a driver instead, Mr Jamwal said.

Later, they were provided help by a policeman and reached Shimla, he said.

Also, five vehicles that were stuck on Bekhalti Road were helped in the state capital, he said.