The Congress' star campaigner Rahul Gandhi arrived in Himachal yesterday, in the very last leg of the campaign and left the same day. The Congress vice president addressed three rallies. 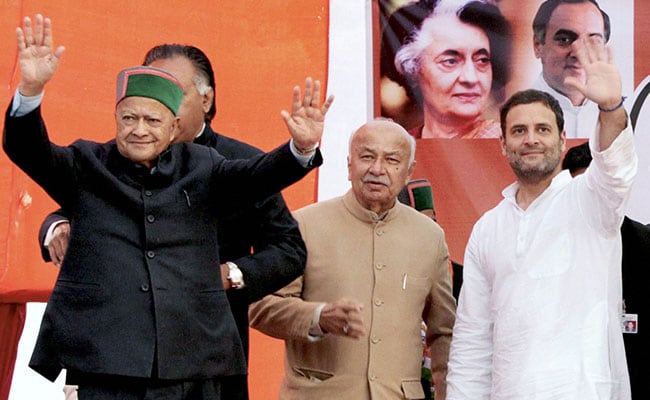 Much of Congress' resources and attention have been focused on Gujarat, which votes next month

Shimla: Virbhadra Singh, six-time chief minister of Himachal Pradesh, won an internal battle in his party the Congress to get projected again for the top post, but as he readies for the fight of his life against the BJP in Thursday's election, help from his party has been limited.

Three days before Himachal Pradesh votes on November 9, the 83-year-old looked forlorn as he said at an election rally in Nurpur, "I have no money left for campaigning, all my accounts have been sealed by the ED and IT department."

As he headed out today on the last day of campaigning before the elections, Mr Singh told NDTV, "I am at peace." He denied his party virtually left him alone to fight the elections, pointing out that several national Congress leaders campaigned in the state.

The Congress' star campaigner Rahul Gandhi arrived in Himachal yesterday, in the very last leg of the campaign and left the same day. The Congress vice president addressed three rallies.

Much of the Congress' resources and attention have been focused on the key state of Gujarat, which will vote next month. Rahul Gandhi has campaigned extensively in Gujarat, where the BJP has been in power for the last 22 years and Mr Gandhi hopes his party can reverse the trend this time.

Though elections in the two states are being held a month apart, votes will be counted on the same day, December 18.

Chief Minister Virbhadra Singh has addressed over 90 rallies all over the state, but says openly that he has no money to even advertise. Choppers are too expensive and the octogenarian has been traveling by road.

Critics point to Mr Singh's rebellion earlier this year as his party weighed whether to repeat him as its chief ministerial candidate or promote younger leaders.

"This is a deliberate strategy by Rahul Gandhi to ensure the older generation of Congress leaders fail. Then he can get his own team in place," alleged BJP lawmaker Anurag Thakur, whose father Prem Kumar Dhumal is the party's candidate for Chief Minister against Mr Singh. The BJP is counting on the state's record of not voting the same party to power - Mr Singh and Mr Dhumal have alternated as the state's Chief Minister since 1993.

Promoted
Listen to the latest songs, only on JioSaavn.com
The BJP's campaign has been built around corruption charges that Virbhadra Singh faces; he is out on bail. In his speeches PM Modi accused the Congress for allowing "five monsters" to flourish - mining, forest, tender, transfer and drugs mafias, he said - and promised to free the state from them.

"Modi keeps talking about corruption, so I have got with me some data from Modi's Niti Aayog... Himachal Pradesh is the least corrupt state in the country, it is also the cleanest," rebutted Rahul Gandhi.