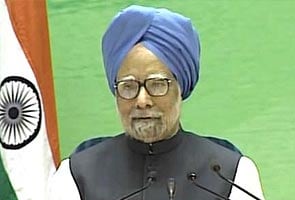 Guwahati: Prime Minister Manmohan Singh is on a day-long visit to Assam. Security has been beefed up in the state after the United Liberation Front of Assam's (ULFA) anti-talk faction called a 12-hour Assam bandh in protest. Police and para-military personnel have been posted on all major thoroughfares, vital installations and patrolling has been intensified throughout the state, official sources said.

Dr Manmohan Singh, who represents Assam in the Rajya Sabha, arrived at the Lokapriya Gopinath Bordoloi International Airport this morning. "I am delighted to be here again in my adopted home state, particularly happy to be here today a week after Bihu," said the PM

"As an adopted son of this state, I am happy that my Assam is now on the cusp of one of the frontline states. I am sure in the 12th plan, Assam will record 9 per cent growth," added Dr Singh.

The Prime Minister is scheduled to inaugurate two new facilities for cancer patients at the B Barooah Cancer Institute. He would subsequently leave for Dispur Secretariat Ground to address the gathering on the occasion of the Assam Legislative Assembly Platinum Jubilee Celebrations.

The Prime Minister will leave for Raj Bhavan for lunch and a meeting with the state cabinet. He will then return to the Nehru Stadium from where he would leave for the airport by a chopper and subsequently depart for New Delhi by 5 p.m, Mr Agnihotri said.

The district administration has made elaborate security arrangements at all the venues of the Prime Minister's programmes with traffic being either diverted or controlled along the roads through which the convoy will pass, Guwahati Senior Superintendent of Police Apurba Jibon Baruah said.

Public have been also directed to avoid parking vehicles on certain roads and localities.The Northeast Frontier Railway has cancelled 11 trains and rescheduled four others following security threat in Assam till April 20.

The physical facility for a linear accelerator to be inaugurated by the Prime Minister at Guwahati's Bhubaneshwar Borooah Cancer Institute is expected to benefit a large number
of cancer patients in the north-eastern region who otherwise have to travel to Kolkata or Mumbai for treatment. During the visit, Singh will also be briefed about the
Revitalization Project Phase-IV for up-gradation of Institute into a centre of excellence at a total cost of Rs. 197.49 crore.

The Institute has a 200 bed Hospital spread over 15 acres of land and also has a 100 bed Guest House for ambulatory patients. About 8,500 new patients and 50,000 old patients visit the Institute every year.

Promoted
Listen to the latest songs, only on JioSaavn.com
The Assam Legislative Assembly commenced functioning on April 7, 1937 at Shillong, the erstwhile capital of the composite state of Assam. In 1972, the Government of Assam decided to shift the capital to Dispur, Guwahati from Shillong.

Accordingly the first sitting of the Budget Session of the Assam Legislative Assembly was held at temporary capital at Dispur on 16th March, 1973.
Comments
Manmohan SinghPM Assam visitAssam news