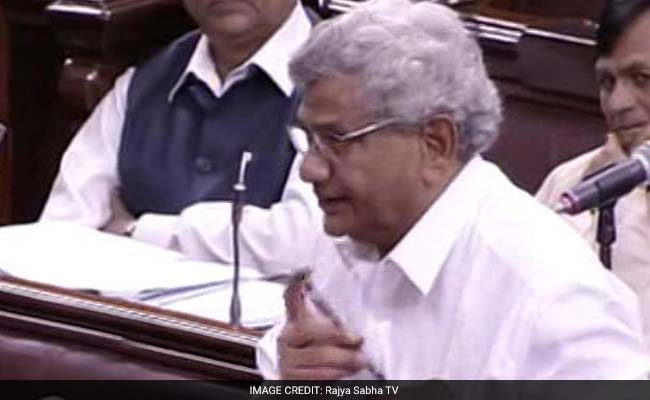 New Delhi: Claiming that "havoc" was being spread in the name of cow protection, CPI(M) leader Sitaram Yechury today sought a categorical statement from the Prime Minister assuring action against cow vigilante outfits, saying the government's attitude was akin to the Machiavellian dictum.

Comparing Prime Minister's recent statement that dalits should not be attacked to Bollywood movie dialogues, Mr Yechury said in Rajya Sabha that while "the Prime Minister had said 'don't attack dalits', does it mean there is a license to attack non-dalits like religious minorities."

Maintaining that the first person to be killed in the name of cow protection was Akhlaq in Dadri, Mr Yechury said the government should unequivocally emphasise that it will abide by the rule of law and those who violate it will face action.

"The present behaviour of the government reminds us of the Machiavellian dictum that first give a people the taste of the worst and then restrain it, to emerge as their benefactor," the senior CPI(M) leader said during Zero Hour.

He said the Prime Minister should come to the House and assert categorically that those who violate law, action will be taken against them. "That assurance has not come and that must come now," Mr Yechury said.

JD(U) leader Sharad Yadav raised the issue relating to allegations that sensitive information including those on the budget were leaked by those linked to a corporate house.

He said that those caught were "only the small fish" while the real culprits had been allowed to go scot-free.
Comments
Sitaram Yechurycow protectionRajya SabhaAkhlaqDadri