Haryana's Boxing Champion Forced to Work as a Domestic Help 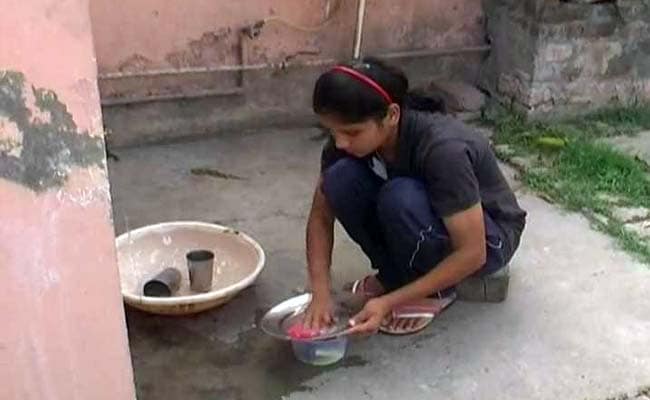 In 2014 Rishu Mittal had won a gold medal in state level championship in 46 kg category and represented Haryana at national level.

National level boxer Rishu Mittal, who has won the Haryana State Championships, has been working as a domestic help to make ends meet, fulfill her dreams and pursue studies.

A student of class ten, Rishu lives in a rented house with her brother who works at a local shop in Kaithal District. Whatever little she earns is spent in paying her school fees.

"I wake up at five in the morning, practice at the stadium, finish all the household work and then go to school. After finishing classes, I finish work at my landlord's place and then go to the evening practice session," says Rishu.

Rishu, who lost her parents at a young age, is now being trained by her coach Rajinder Sandhu. "Despite having a poor diet, Rishu is doing very well as a pugilist. She has a bright future. If some NGO adopts her, her dreams will be fulfilled," says coach Sandhu.

The 16-year-old Rishu dreams of becoming India's next Mary Kom.

In 2014, she won a gold medal in state level championship in 46 kg category and represented Haryana during national championships in Gwalior last December. Earlier she had won bronze medals in Bhivani and Faridabad in the year 2012 and 2013 respectively.

When asked about the plight of the young state boxing champion, Haryana Sports Minister Anil Vij promised help very soon. "I am aware of this. I have already asked officials for further details. Sportspersons should concentrate on their game. We will take care of the rest," he said.