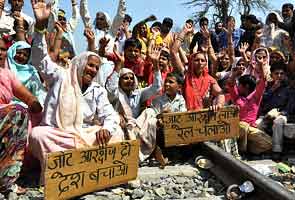 Chandigarh: In a bid to mount pressure on the government, Haryana Jat leaders announced on Wednesday that their community will boycott the Holi festival in the state March 20 and observe a "black day".

Hundreds of Jat community members, including women, are since March 7 squatting on railway tracks and disrupting train services in Punjab and Haryana to press for reservations in government jobs under the Other Backward Classes (OBC) category.

"A special delegation of Jats, including members from Punjab, Haryana and Jammu and Kashmir, met Union Home Minister and Social Justice and Empowerment Minister in a joint meeting in New Delhi today (Wednesday). The meeting was neither successful nor unsuccessful," said Hawa Singh Sangwan, state president of All India Jat Aarakshan Sangarsh Samiti.

"They have sought three-day time to announce their decision. In the meantime, we would continue our protest and intensify it after three days. Haryana Jats would also boycott Holi and celebrate it as black day," he said.

In Haryana, Jat protesters have blocked almost all railway lines in Bhiwani, Hisar and Jind districts. For the last few days, railway authorities have either cancelled many trains or diverted these, causing losses worth millions of rupees.

Sangwan said they would gradually block all railway lines in the state and cut off Haryana from other parts of the country.

Due to shortage of coal caused by the agitation, power generation at the recently-commissioned 1,200 MW Rajiv Gandhi Thermal Power Plant at Khedar in Hisar district has been stopped for the last four days, officials said.