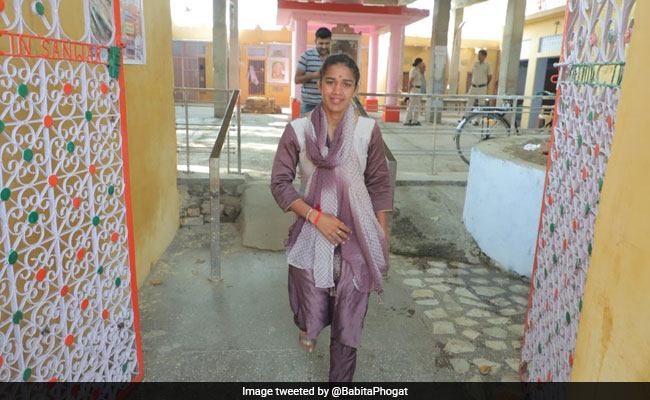 Haryana Election: Babita Phogat is making her debut in apolitical dangal' from Dadri.

Wrestler-turned-politician and BJP candidate Babita Phogat on Monday cast her vote in her native village in Bhiwani along with her father Mahavir Phogat and sister Geeta Phogat.

Babita Phogat is among the 12 women candidates fielded by the Bharatiya Janata Party (BJP) in the 90-member assembly elections.

"Development of my constituency and promotion of sports in the state will be the top priorities, if I am getting elected," she told reporters after casting her vote.

Two-time Commonwealth Games gold medallist Babita Phogat, who is making her debut in apolitical dangal' from Dadri in Charki Dadri district, is advocating promotion of women's sports in the state.

She aims to rechristen Prime Minister Narendra Modi's flagship 'Beti Bachao, Beti Padhao' programme by incorporating 'Beti Khilao' in it with an aim to not only overcome the problem of decline in child sex ratio but also promote sports among women in villages.

Unlike Babita Phogat, others in the fray are veteran politicians belonging to the Jat community. While Nirpender and Satpal are former legislators, Sombir finished second in the 2014 assembly polls.

As per election records, no candidate has ever won the seat for the second consecutive term and every time the competition has been close.In the last four assembly elections, the margin of votes of the winner has been a slender -- less than 2,000.