Sunny Deol joined the BJP weeks before the national election in May this year and was elected to the Lok Sabha from Gurdaspur in Punjab. 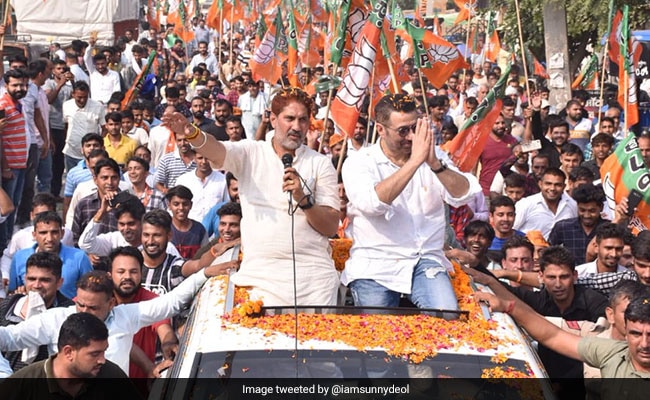 Sunny Deol campaigned for the BJP ahead of the elections in Haryana.

Actor-turned-politician Sunny Deol, known for his fiery performances on screen, is burning up the campaign trail in Haryana ahead of Monday's state elections, employing some of his most iconic dialogues.

On Thursday, he was seen canvassing for Haryana Minister Captain Abhimanyu, who is seeking re-election from Narnaund in Hisar district.

I know I keep saying 'tareek pe tareek' (dates after dates), but remember the tareek of October 21. You have to press the button with the Lotus symbol. Otherwise this 'dhaai kilo ka haath' (2.5 kg arm)... well this time I will just fold them," he said.

'Tareek pe tareek' and 'Dhai kilo ka haath' are two of Sunny Deol's most famous dialogues from the 1993 movie Damini in which he plays a lawyer fighting for justice in a rape case.

Sunny Deol joined the BJP weeks before the national election in May this year and was fielded from Gurdaspur in Punjab, a constituency held earlier by filmstar Vinod Khanna. The 62-year-old actor defeated Sunil Jakhar of the Congress by more than 77,000 votes.

However, his political career has had a rocky start. Sunny Deol has been accused of "outsourcing" his parliamentary duties by naming a representative to take care of his constituency.

Mr Deol is the third in his family to take the plunge into politics. His stepmother Hema Malini is also a BJP lawmaker.