The manifesto said the party will make a legal provision to ensure farmers don't have to mortgage more than 1.25 times land of the loan amount. 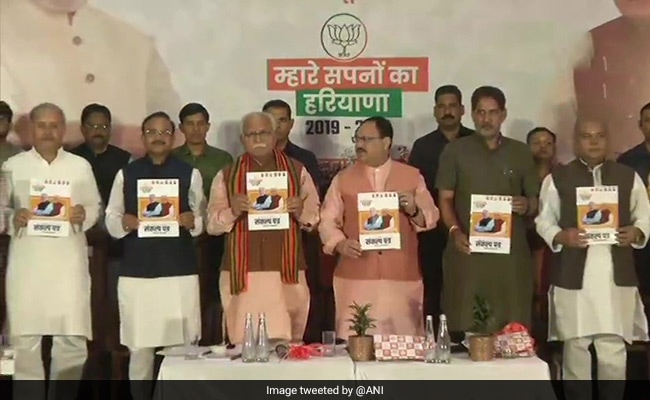 The BJP described the poll manifesto, released only in Hindi, as a ''Sankalp Patra''.

Aiming to retain power, the BJP on Sunday released its election manifesto for Haryana polls, promising a slew of measures, including easy loans, for farmers and SC members, free education to girls from poor families and skill training to 25 lakh youths.

During the unveiling of the 25-page manifesto in Hindi, Haryana Chief Minister ML Khattar said while the opposition was using freebies to woo voters ahead of the October 21 polls, his party focussed on "realism" and things that are doable.

"Helping those sections of society who need it, is to be helped, but doling out freebies for votes is not a healthy trend," he said, apparently targeting the main rival Congress, which has promised to write off loans to farmers "within 24 hours" of coming to power.

The manifesto said the party will make a legal provision to ensure farmers don't have to mortgage more than 1.25 times land of the loan amount.

The BJP pledged it will ensure free education in government educational institutes up to the post-graduate level for two girls per family having income less than Rs 1.80 lakh per annum or land holdings up to five acres.

It also promised to make women and children anaemia-free in the next five years.

JP Nadda said that this was a "commitment paper" which represented all sections of society.

The BJP described the poll manifesto, released only in Hindi, as a ''Sankalp Patra''.

ML Khattar said the manifesto was based on the philosophy of ''Sarve Bhavantu Sukhinah, Sarve Santu Niramayah'', a mantra which means may all become happy and free from illnesses.

The BJP has set a target of winning over 75 seats in the 90-member assembly.

The party pledged to double the income of farmers by 2022.

According to the manifesto, 14 lakh farmers having landholding less than five acres to get Rs 3,000 per month pension; interest and penalty on farm loans taken from cooperative banks to be waived for which provisions of Rs 5,000 crore will be made.

Committed to showing zero tolerance for corruption, the BJP said round-the-clock toll-free "Anti Corruption Call Centre" will be set up on which callers, whose names will be kept the secret, can give their complaints about any corrupt government employee.

Special incentives for industries employing 95 per cent local people, the party promised. No liquor vend can be opened within village habitat limits.

Those citizens having the certificate of digital literacy and having an annual income of less than Rs 1.80 lakh or land holding less than five acres will be given smartphones, says the manifesto.

Water conservation, environment protection and land-preservation courses will be included in the school curriculum. All government colleges and universities will get free Wi-Fi.

Among other women-centric initiatives, it promised a ''Pink bus'' service for women as per need, sanitary napkin vending machines at public places in villages and cities, self-defence training for school girls, fast-track courts to be set up to hear crime against women, "Sushma Stree" award to be started for women working for women empowerment.

"It is a commitment paper and it is a serious and studied document. A lot of effort has gone into its preparation. This is a pragmatic and practical paper, what we promised are things which are doable," JP Nadda said, addressing the media after the manifesto was released.

"This commitment paper represents all sections of the society. Its focus is on addressing a person sitting on the last pedestal," he said.

About other poll promises, JP Nadda said the focus will also be on comprehensive healthcare, adding that 2,000 health and wellness centres will be set up.

Every person at the age of 30 will go for compulsory screening for hypertension, diabetes, TB, leprosy, dental and mental care.

To make Haryana tuberculosis-free, TB Free State Mission to be started. Free bus travel for cancer patients and their companions.

He said 1,000 ''khel'' (sports) nurseries will also be set up in the state if the party is voted to power again.

Among other initiatives, farmers coming to sell produce to get Rs 10 ''Kisan Thali'' in every ''Mandi'' and sugar mill, Kisan Kalyan Pradhikaran to be set up with Rs 1,000 crore budget, a Rs 500-crore fund will be kept for Agri marketing, branding and packaging.

Alternative Crop Mission to be set up, livestock to be tagged and collection centres to be set up for cow dung and urine.

The party is committed to bring SYL waters to Haryana, said ML Khattar.

The BJP promised a task force to clean Yamuna, Ghaggar and other rivers. It also said it will try to make Haryana the first state in the country to be free of single-use plastic.

Youth Development and Self Employment and ''Antyodaya'' Ministries and a Department to attract foreign investment will be set up.

MSMEs will be facilitated to secure a loan up to Rs 10 lakh in just an hour and a promise to bring a legislation to ban entry of humans inside sewers to clean them.