Election in Haryana 2019: The BJP has never won in the Jat-dominated area, but the party is banking on the star power of Babita Phogat, who, along with sister Geeta, inspired the blockbuster "Dangal". 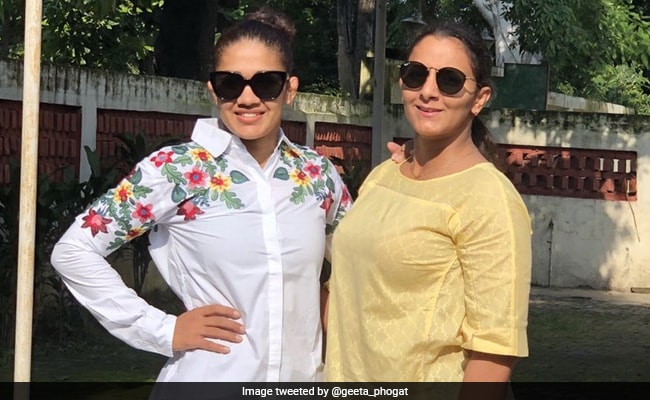 As voting took place in Haryana's Dadri today, where wrestler Babita Phogat is fighting her debut election, her biggest champion was Geeta Phogat, who admitted that her "quiet" younger sister had surprised her. Babita Phogat, 29, is the BJP candidate in the seat currently held by the Indian National Lok Dal (INLD).

The BJP has never won in the Jat-dominated area, but the party is banking on the star power of Babita Phogat, who, along with sister Geeta, inspired the blockbuster "Dangal".

Dadri was also among the districts where Prime Minister Narendra Modi held a rally.

"Babita is younger than me and she is very quiet. The way she is meeting people and conveying her message has surprised me as she was very quiet," Geeta Phogat told news agency ANI on Monday, after voting.

She said she was confident her sister would ace politics just as she did the wrestling arena. "There is love and respect towards my sister. She will make her name in politics as well...She is getting a lot of love from everyone," said Geeta.

Babita Phogat faces tough rivals including Satpal Sangwan of the Jannayak Janata Party (JJP) and Major Nirpender Sangwan of the Congress. Somvir Sangwan, who was earlier in the BJP, is also contesting as an independent candidate.

Somvir Sangwan, as BJP candidate in 2014, narrowly lost to INLD's Rajdeep Phogat. Rajdeep later joined the JJP, but decided not to contest this time.

"Winning and losing are a part of the game. We are players and we don't know how to do witty and pity politics," Geeta Phogat was quoted as telling ANI.

Results of voting in 90-seat Haryana will be announced on Thursday.