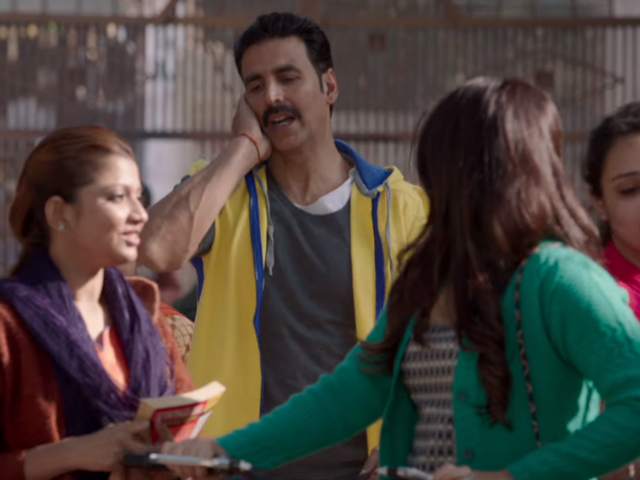 New Delhi: The first song of Akshay Kumar's upcoming film Toilet: Ek Prem Katha, titled Hans Mat Pagli, was unveiled by the makers of the film today. The two-minute song shows how Akshay aka Keshav falls in love with Bhumi Pednekar aka Jaya at the first sight. He is seen following her everywhere, much to Jaya's annoyance. The melodious song has been sung by Sonu Nigam and Shreya Ghoshal. The lyrics of Hans Mat Pagli have been written by Siddarth and Garima. The music of the song has been composed by Vickey Prasad. Toilet: Ek Prem Katha, directed by Shree Narayan Singh, deals with the need of sanitization in rural areas and is inspired by Prime Minister Narendra Modi's Swachh Bharat campaign.

On June 12, the makers of Toilet: Ek Prem Katha unveiled the trailer of the film, which was highly praised by the Bollywood celebrities and critics. After watching the trailer, Censor Board of Film Certification chief Pahlaj Nihalani tweeted that the film 'should be made tax free.'

Promoted
Listen to the latest songs, only on JioSaavn.com
In May, Akshay Kumar met Prime Minister Narendra Modi and Railway Minister Suresh Prabhu to brief them about his film Toilet: Ek Prem Katha. Mr Prabhu praised the actor for his efforts to create awareness about Swacch Bharat Abhiyan through films.

Toilet: Ek Prem Katha will release in theatres on August 11.