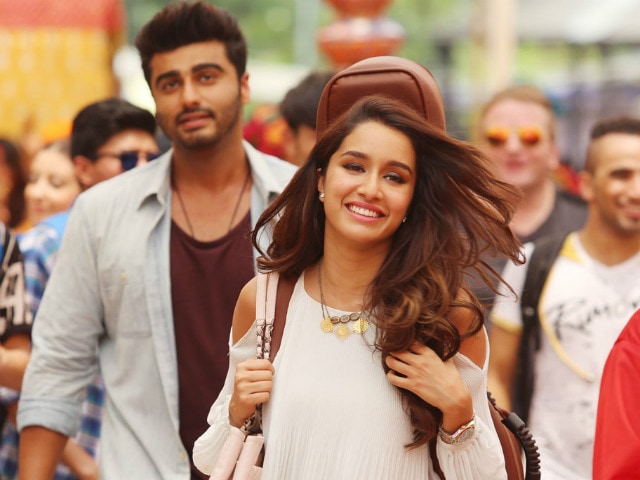 Half Girlfriend Box Office: Shraddha, Arjun in a still from the film

New Delhi: Shraddha Kapoor's new film with Arjun Kapoor, Half Girlfriend, gets a good enough start at the box office, raking in Rs 10 crores on opening day, reported trade analyst Taran Adarsh. Half Girlfriend is Chetan Bhagat's fourth film that has been adapted for the big screen. Mohit Suri has helmed the project which marks Arjun and Shraddha's first film together. Half Girlfriend has scored almost four times more than Irrfan Khan's Hindi Medium, which also released on Friday. Half Girlfriend stars Shraddha as Delhi based basketball player Riya Somani while Arjun is a Bihari student seeking admission in one of Delhi's top colleges.

The two met around a basketball court and their story of friendship-turned-love took off. While Madhav continues to remain in awe of Riya, she declares: "Main tumhari girlfriend nahi hoon. But I can be your half girlfriend?" Arjun, afraid of losing Riya, agrees to the complicated relationship status but cannot handle it for long.

Promoted
Listen to the latest songs, only on JioSaavn.com
In his review for NDTV, Raja Sen writes: "Riya is visibly fond of Madhav and loves being with him, but, at 19, is wary of the girlfriend tag and what it may entail. All systems seem go: She's making him meet her folks, she's using the word 'us' to describe them, she's initiating the first kiss, she's singing lovesongs to him across a crowded lawn. This warmth is countered by bewildering bouts of insecurity from the otherwise devoted but semantically obsessed Madhav, who disregards her affectionate requests to take things slow by manhandling her, and snapping that she should bed him or buzz off. She chooses the latter."

Half Girlfriend has extensively been shot in Delhi, Patna and New York.