Had Raised Cases Of Persecution Of Minorities With Pakistan: Centre

He was responding to a question on whether the government has taken note of the frequent attacks on temples or Gurdwaras in Afghanistan, Pakistan and other foreign countries. 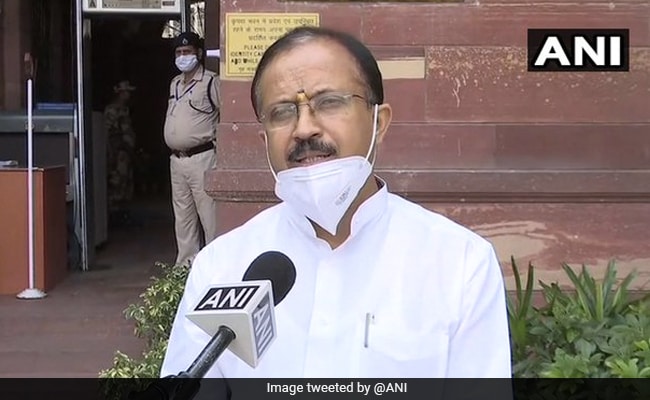 It is the responsibility of the Pakistani government to discharge its obligations, he said.

The government today said it had raised with Pakistan cases of persecution of minority groups in that country and urged it to take steps to protect and promote the security of minority communities and their places of religious worship.

In a written reply to a question in Lok Sabha, Minister of State for External Affairs V Muraleedharan said in the case of Pakistan, there have been reports of frequent instances of vandalism and desecration of places of religious worship belonging to the minority communities.

He was responding to a question on whether the government has taken note of the frequent attacks on temples or Gurdwaras in Afghanistan, Pakistan and other foreign countries.

"Based on reports of persecution of minority groups in Pakistan, government has raised all such cases with the government of Pakistan calling upon it to take steps to protect and promote the safety, security and well-being of its minority communities and their places of religious worship," Muraleedharan said.

Pakistan has also been asked to take immediate measures to expeditiously bring the perpetrators of such despicable and heinous acts to justice, he said.

It is the responsibility of the Pakistani government to discharge its obligations towards its citizens, including those from the minority community, the minister said.

"As regards to Indians in Pakistan, all necessary assistance is provided through our High Commission in Islamabad. Government attaches high importance to the issue of Indian prisoners held in Pakistan custody. As per the lists exchanged on 01 July 2022, Pakistan acknowledged the custody of 49 civilian prisoners and 633 fishermen who are Indians or believed-to-be Indians," he said.

As soon as cases of apprehension of Indian fishermen and their fishing boats by Pakistan are reported, immediate steps are taken by the Indian Mission in Islamabad towards seeking consular access from the Pakistani government, Muraleedharan said.

"All possible assistance, including legal assistance, is extended to the fishermen for their early release and repatriation, along with the release of their boats. Government consistently takes up the matter of welfare, safety and security of Indian fishermen in Pakistan, pending their release," he said.

As a result of persistent efforts, India has been successful in securing the release and repatriation of more than 2,700 Indian prisoners from Pakistan's custody since 2014, he said.

India has sought early consular access and release and repatriation of the remaining Indians in Pakistan's custody, Muraleedharan said.

He said in case of Afghanistan, there were attacks at Gurudwara Har Rai Sahib in Kabul in March 2020, and Gurudwara Dashmesh Pita Sahib Sri Gobind Sahib Ji in Kabul on June 18 2022.

The attacks led to the loss of life of around 25 people and injured around 11 people, including one Indian national, he said, noting that India strongly condemned both the cowardly terrorist attacks which targeted the innocent civilian population.

"In view of the rapid deterioration in the security situation in Afghanistan, especially after 15 August 2021, a 24X7 Special Afghanistan Cell was set up in the Ministry of External Affairs to facilitate repatriation of Indians.

"Thereafter, under Operation Devi Shakti, Government of India evacuated a total of 669 people, including 448 Indian nationals in seven flights," the minister said.

All Indian nationals who had sought repatriation to India were evacuated, he said.

Further, e-visas were issued promptly to the Afghan Sikh community members to enable them to travel to India, he added.

Responding to another question, Ramesh said as per the information available with the ministry, the number of Indian prisoners, including under-trials, in foreign jails at present is 8,441, of which 4,389 are lodged in jails of Gulf countries.