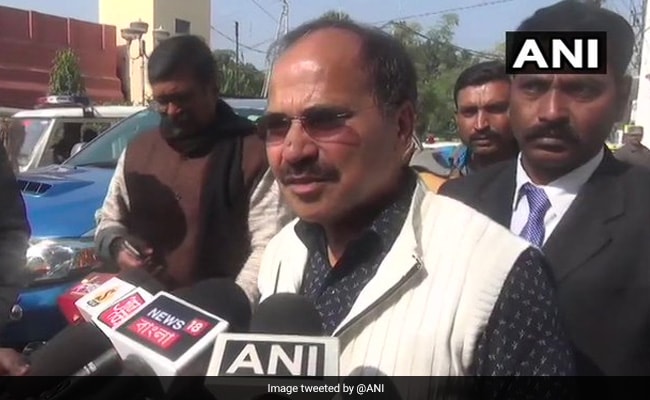 Congress leader Adhir Ranjan Chowdhury's tweet on Davinder Singh, the Jammu and Kashmir police officer caught with terrorists sparked a war of words on Twitter today, with the Congress MP and Karnataka BJP trading allegations of spreading communal disharmony. The spat began after Mr Chowdhury said controversy over the Davinder Singh's arrest would have been "more vociferous... had Davinder Singh been Davinder Khan" and escalated after Karnataka BJP hit back by calling the opposition party "Pakistan's Best Friend". The BJP's Sambit Patra also got involved and said the Congress had "attack(ed) India (to) save Pakistan".

"Had Davinder Singh by default been Davinder Khan, the reaction of troll regiment of RSS would have been more strident and vociferous... enemies of our country ought to be condemned irrespective of colour, creed, and religion," Mr Chowdhury, who is his party's leader in the Lok Sabha, wrote.

"The chink in the armour is exposed in the Valley... questions will certainly arise as to who were (the) real culprits behind the gruesome Pulwama incident..." he said, later adding, in response to Karnataka BJP's comment, that: "RSS-BJP has been striding hard to disrupt communal harmony of our nation".

Now question will certainly be arisen as to who were the real culprits behind the gruesome Pulwama incident, need a fresh look on it.
(3/3)#DavindarSingh

Karnataka BJP, which has been active on Twitter today - they also hit out at the Congress's Rahul Gandhi over his challenge to Prime Minister Narendra Modi -, responded by calling the Congress "Pakistan's Best Friend" and accusing it of communalising the armed forces.

"What else can Indians expect from the leaders of Pakistan's 'Best Friend'? Who communalised Armed Forces? Who gave clean chit to Pakistani Terrorists on several occasions? Who coined the term 'Hindu Terror'?" the tweet read.

What else can Indians expect from the leaders of Pakistan's "Best Friend", @INCIndia?

Who gave clean chit to Pakistani Terrorists on several occasions?

Who coined the term "Hindu Terror?

The BJP's Sambit Patra also hit out at the Congress and said he "challenged" party chief Sonia Gandhi to say "(you) don't trust Indian Army and intelligence agencies".

"Dear Congress, Sonia Gandhi and Rahul Gandhi, do you have any doubt who launched the terror attack on Pulwama? I challenge you to come on camera and express that you don't trust Indian Army and Indian Intelligence agencies," Mr Patra was quoted by news agency IANS.

"This is not a slip of the tongue, this is Congress speaking in Pakistan's words," he added.

Davinder Singh, the J&K cop referred to by Mr Chowdhury, is a senior officer who was arrested on Saturday while travelling with three Hizbul Mujahideen terrorists.

In a hugely embarrassing turn of events for the BJP and Jammu and Kashmir Police, questions still remain over why Davinder Singh, who was part of a group of officers that last week received envoys of 15 foreign nations on a visit to Jammu and Kashmir, was travelling to Delhi with armed terrorists.

Following his arrest and interrogation J&K cops busted a large terrorist hideout in Shopian district and recovered large stores of arms and ammunition, some of which were found in Davinder Singh's residence; the home shares a wall with the headquarters of the Army's 15 Corps.

Mr Chowdhury's comments come only days after he took a swipe at the newly-appointed Army Chief, telling General Manoj Mukund Naravane to "talk less and work more" over remarks on recapturing Pakistan-occupied Kashmir.

The Pulwama attack, carried out by a suicide bomber affiliated to the Jaish-e-Mohammad (JeM), killed 40 CRPF soldiers and led to heightened tensions between India and Pakistan. Ten days later the Air Force crossed the border into Pakistan to strike JeM training camps.

India has repeatedly accused Pakistan of failing to take act against terror groups operating from its soil. Last year the Financial Action Task Force, a global anti-terror watchdog, retained it on a list of nations whose laws are too weak to deal with terror funding.