"... Like Your Grandma Did?": Karnataka BJP After Rahul Gandhi Challenges PM 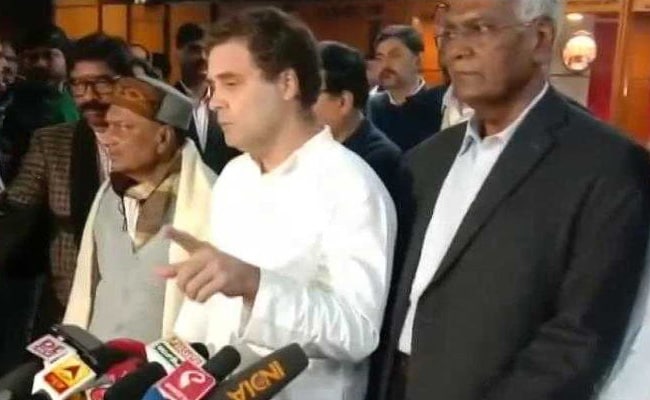 Karnataka BJP was responding to a statement by Congress's Rahul Gandhi

A day after Congress leader Rahul Gandhi challenged Prime Minister Narendra Modi to visit any university in the country and explain why "the economy is a basket case", Karnataka BJP responded by claiming the Prime Minister would instead address students' concerns through his Mann Ki Baat programme.

The state unit of the party also hit out at Mr Gandhi for his party's criticism of the government, over its handling of student protests against the controversial citizenship law, by referring to the 45-day shutdown of JNU by his grandmother - former Prime Minister Indira Gandhi.

You have challenged PM @narendramodi to stand in front of students & talk to them.

Should He talk to them after shutting down #JNU for 45 days, arrest students & lock them up like your grandma Indira Gandhi did?

Or should He talk to them through #MannKiBaat? https://t.co/7myTneLFx8

The tweet was referring a shutdown imposed by former Prime Minister Indira Gandhi in 1980/81 after violence broke out between rival Left-backed organisations.

On Monday evening, after 20 opposition parties met in Delhi to discuss anti-citizenship law and NRC protests, Mr Gandhi demanded the PM speak directly to students about the condition of the economy.

"Mr Modi should stand up and have the courage to speak to the youngsters in the universities and tell them why the economy is a basket case. He does not have the guts to do it. I challenge him to tell the people what he is going to do with the country," Mr Gandhi told reporters.

The Indian economy is in the midst of a prolonged slowdown with several key indicators registering record downward trends. Last week news agency Reuters said private economists had lowered the growth forecast to around 5 per cent for the 2019/20 fiscal year - the slowest in more than a decade.

Last month was also the third in a row that consumer inflation - rate of increase in prices of consumer goods - was above the RBI's medium-term target of 4 per cent.

The Congress has repeatedly targeted PM Modi's ruling BJP on this issue, particularly with the government due to present the Union Budget in parliament last month.

Meanwhile, the massive protests that have broken out across the country over the Citizenship (Amendment) Act, or CAA, have increased pressure on the central government. The January 5 attack on JNU students and faculty by masked and armed has sharpened anger against the centre.

Several opposition parties, including the Congress, have denounced the attack and supported the students; Mr Gandhi accused PM Modi of pursuing a "distract and divide" policy.

Interim Congress chief Sonia Gandhi also hit out at the government yesterday, reinforcing the party's position that the real issue underlying the protests was different.

"There have been nation-wide spontaneous protests by the youth supported by citizens from all walks of life. The immediate cause is the CAA and NRC but they reflect widespread frustration and pent up anger," she said.

Instead of addressing it, the government has decided to crack down on protesters, Mrs Gandhi said.