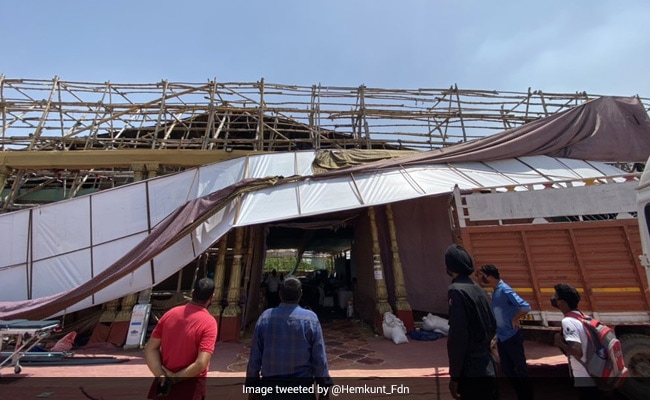 The Hemkunt Foundation helped many patients with oxygen during the peak of the second Covid wave.

A temporary facility of NGO Hemkunt Foundation, set up in Haryana's Gurgaon to help Covid patients in need of oxygen, was on Thursday attacked and torn down by unknown persons.

The foundation had helped many during the worst phase of the second Covid wave when Delhi and its nearby areas turned desperate for oxygen.

There were no patients at the centre in Gurugram's Sector 61 when the attack took place, though people were constantly coming to refill oxygen cylinders.

The foundation said that now, in order to continue helping people, it needs access to 20,000 square metres of space at or anywhere near the city centre.

Our O2 Centre at Gurgaon was destroyed forcefully today and our belongings were damanged.

To continue helping everyone in need, we need access to 20,000 sq. ft. land at or near the City Centre of Gurgaon.

Please help us spread the word#COVID19Indiapic.twitter.com/EJBd0ZDxTK

The assault began around 6 am or 7 am on Thursday, with the attackers first taking away the facility's generators and then cutting off its power supply, Foundation officials said.

"They were all local goons, you know, who came in their Fortuners and stuff...and with guns. One man was armed as well," the foundation's director, Harteerath Singh, told NDTV.

"We all know who's behind this. I don't want to take names. I have been receiving threats earlier as well. I have been constantly getting death threats. And I am forced to sit outside my own facility."

Relaying videos of the torn down facility through his phone camera, Mr Singh said all staff, including many women, was being shifted and all volunteers had vacated the space immediately.

Blaming "people who have hold" for the attack, he said the foundation can't do much other than vacate the space.

"We will continue to do seva (service) no matter what, but unfortunately people in power are behind this," Mr Singh said. "We have filed a complaint and the police is here as well, but we know how the system works."

A preliminary police probe showed that Hemkunt Foundation had set up the facility in Sector 61 based on a verbal nod from the lessee of the plot, PTI reported.

According to the local administration, Hemkunt Foundation took the land from "Rama Tent House" for two months on a verbal agreement of Rs. 3.5 lakh. On Thursday morning, people from the tent company came and started vacating the place forcefully. A case has been registered and necessary action has been taken against the people who are responsible for the vandalism.

"As there have been no patients at the facility for the past few days, they (the lessees) had asked them (Foundation) to vacate the place. A dispute seems to have risen," a police official told PTI.