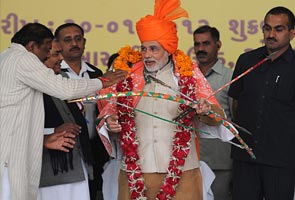 Ahmedabad: In a stunning statement, the Supreme Court-appointed Special Investigation Team (SIT) has said that even if Gujarat Chief Minister Narendra Modi had told the police during the 2002 riots to allow the Hindus to vent their anger, the mere statement of those in the confines of a room does not constitute an offence. The SIT seems to have based their report on public statements made by Mr Modi during the riots.

"Interpretations made on alleged illegal instructions given by the Chief Minister by RB Shreekumar and Sanjiv Bhatt, appear to be without any basis. Further, even if such allegations are believed for the sake of argument, mere statement of alleged words in the four walls of a room does not constitute any offence," says the report by the SIT, headed by RK Raghavan.

This reference is contrary to the deposition of two senior police officers who alleged that the Chief Minister had done nothing to stop the post-Godhra riots. Sanjiv Bhatt, the Deputy Commissioner of Police in 2002, had alleged that Mr Modi told police officers during the riots, "For too long the Gujarat Police had been following the principle of balancing the actions against the Hindus and Muslims while dealing with the communal riots in Gujarat. This time the situation warranted that the Muslims be taught a lesson to ensure that such incidents do not recur again."

This allegation was supported by former Gujarat Additional Director General of Police RB Sreekumar, who told the Nanawati commission, "In communal riots police takes action against Hindus and Muslims on one-to-one basis. This will not do now - allow Hindus to give vent to their anger"

The SIT says in its investigations say it could find no physical evidence of Mr Modi's involvement and that the Chief Minister had publicly denounced the riots. "The government has taken this heinous, inhuman, organised, violent act very seriously," Mr Modi had said in the Gujarat Assembly on February 27, 2002.

The SIT says that this statement was made by Mr Modi when he had visited the riot-affected Godhra before the meeting took place where he had allegedly asked the police to allow "Hindus to vent their anger."

In his appeal on Doordarshan on February 28, the Chief Minister reiterated that the "guilty will be punished for their heinous crime:"

The SIT says, "Interpretations made on alleged illegal instructions given by the CM... appear to be without any basis"

"The SIT findings that the government had made all efforts to control riots. Now it's time that anti-Gujarat elements stop their vicious and malicious propaganda against the Modi government," said Jaynarayan Vyas, the state government spokesperson.

However, there are many who are still not convinced.

"There are other serious allegations in the report and the amicus has clearly suggested that a case against Modi exists. And we hope the court will cognizance of it," said Congress' Shaktisinh Gohil, Leader of the Opposition in the Gujarat Assembly.

Promoted
Listen to the latest songs, only on JioSaavn.com
Zakia Jafri, the widow of former Congress MP Ehsaan Jafri, was given a copy of the SIT report on May 7. She has alleged that she had not been given all the documents, and at least 20 pages of the report are missing. Ehsaan Jafri was killed in the Gulberg Housing Society massacre on February 28, 2002.