Ravindra Jadeja's wife Rivaba is a BJP candidate while his sister Naina and father Anirudhsinh Jadeja have campaigned for Congress. 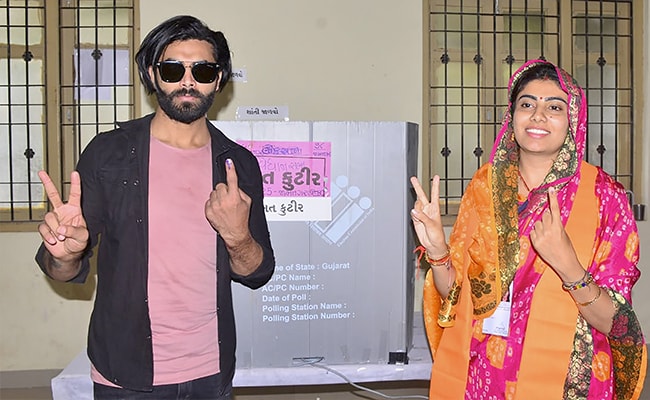 Naina Jadeja, sister of cricketer Ravindra Jadeja, said on Thursday it's not 'Jadeja versus Jadeja' in Gujarat's Jamnagar since several families there have members working for different parties. Her sister-in-law Rivaba Jadeja, wife of Ravindra Jadeja, is a BJP candidate from Jamnagar North while Naina and their father Anirudhsinh Jadeja have campaigned for Congress in the ongoing assembly elections.

Anirudhsinh Jadeja and Naina Jadeja cast their votes at a polling station in Jamnagar today.

Urging people to vote for Congress to bring change in the state, Naina Jadeja said, "After five years, people have got this opportunity to change the government. BJP has only made false promises. They had spoken about many things but did not succeed."

"The education system has suffered and inflation is at a record high. People should understand that there is a need for a change of government because if they come to power, again and again, they will feel they are the only ones who can run this country. But in reality, they are not doing anything. They did not even fulfill their promises to the people," she added.

On being asked if it is 'Jadeja versus Jadeja' in Jamnagar, she said, "no, it's not like this."

"This is not happening for the first time. Several families in Jamnagar have members working for different parties. Be satisfied with your ideology, give your 100 per cent and the better one will win," she added.

She further said that as a BJP candidate Rivaba is her rival but as a sister-in-law she is "good".

"My love for my brother stays the same. My sister-in-law is a BJP candidate now. As a sister-in-law she is good," said Naina Jadeja when asked if there were any family issues because of supporting different parties. "In our family, we have freedom. Our family members can do whatever they want to do. They have the right to do that."

Anirudhsinh Jadeja, the cricketer's father, said that he is with Congress as party matters are different from family matters.

"I am with Congress. Party matters are different from family matters. We should stay with our party, been with them for years. He knows it is a party matter, no family problem," said Anirudhsinh Jadeja.

Meanwhile, exuding confidence that the BJP will win with a good margin, Rivaba Jadeja said that they would focus on the overall development of the state after forming the government.

"There is no difficulty. There can be people of different ideologies in the same family. I have trust in the people of Jamnagar, we will focus on overall development, and this time as well BJP will win with a good margin," said Rivaba Jadeja.

Polling for the first phase of the Gujarat assembly election is underway. The second phase will be held on December 5 and the votes will be counted on December 8.