'Greed' for PM post not good: Congress to Narendra Modi 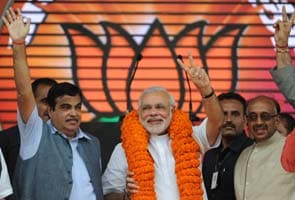 New Delhi: Congress leader Rashid Alvi on Sunday asserted that party vice president Rahul Gandhi did not insult Prime Minister Manmohan Singh when he spoke against a proposed ordinance aimed at shielding convicted lawmakers which had been approved by the union cabinet.

The assertion came after remarks made by Gujarat Chief Minister Narendra Modi, prime ministerial candidate of the Bharatiya Janata Party for the 2014 general elections, at the "Vikas Rally" in the national capital Sunday that Rahul Gandhi had insulted the nation's prime minister, and termed the matter a struggle between dynasty and democracy.

"Rahul Gandhi did not say anything against the prime minister. He only expressed his view on the ordinance," Mr Alvi told reporters.

"But Narendra Modi is expert in spoiling a situation. I have a humble observation -- so much greed for power and the prime minister's post is not good," Mr Alvi said.

"People in Gujarat need you, that is what you have been elected for, and you are here in Delhi misleading people," Mr Alvi said, commenting upon Mr Modi's political rally in the national capital.

Rahul Gandhi, in a surprise move on Friday, told mediapersons at the Press Club of India in Delhi that the ordinance approved by the union cabinet to shield convicted lawmakers was "complete nonsense" and should be "torn up and thrown away".

The proposed ordinance seeks to negate the July 10 ruling of the Supreme Court that struck down a legal provision that protected lawmakers from disqualification when convicted in a criminal case.